Toronto, Ontario — Karlsruhe, Germany will be the host of the 8th World’s Leading Trade Fair for Industrial Coating Technologies—otherwise known as the PaintExpo. From April 21-24, this exhibition will aim to train industry painters on how to improve quality, productivity, sustainability, as well as enhance efficiency. Painters will also learn to react flexibly to […]

PARIS–(BUSINESS WIRE)–ESI Group (Paris:ESI), leading innovator in Virtual Prototyping software and services for manufacturing industries, helped Farasis Energy, a Chinese-American battery provider, win in record-breaking time, a call for tenders made by a premium German automotive OEM. Thanks to ESI’s expertise, the reliability of the virtual prototype of the new Farasis battery model was decisive […]

Inspired by the future: The Mercedes-Benz VISION AVTR

LAS VEGAS–(BUSINESS WIRE)–The Highlights Partnership: Mercedes-Benz VISION AVTR – inspired by AVATAR: The name of the groundbreaking concept vehicle stands not only for the close collaboration in developing the showcar together with the AVATAR team but also for ADVANCED VEHICLE TRANSFORMATION. This concept vehicle embodies the vision of Mercedes-Benz designers, engineers and trend researchers for […]

Nearly Two in Three U.S. Ride-Hailers Would Give Up Their Car for Ride-Hailing Services, Accenture Study Finds

More than nine in 10 U.S. consumers satisfied with ride-hailing companies, yet brand loyalty remains elusive NEW YORK–(BUSINESS WIRE)–Nearly two-thirds (63%) of U.S. car owners who use ride-hailing services said they would consider giving up their personal vehicle over the next decade in favor of ride-hailing, according to new research from Accenture (NYSE: ACN). Based […]

Company Founder David Hall to Continue as Chairman of the Board SAN JOSE, Calif.–(BUSINESS WIRE)–#CES2020—Velodyne Lidar, Inc. today announced Anand Gopalan as its new CEO. Gopalan, who previously was Velodyne’s CTO, assumes the position from Velodyne’s legendary founder David Hall. Hall will continue as full-time Chairman of the Board and remain actively involved in directing […]

Built with safety and reliability in mind, the groundbreaking technology is able to intelligently focus anywhere SUNNYVALE, Calif.–(BUSINESS WIRE)–#ces2020–Innovusion Inc. is a worldwide leader in the design and development of long-range image-grade LiDAR (Light Detection and Ranging) systems for vehicle safety applications. Following the success of its predecessors, “Cheetah” and “Jaguar,” Innovusion will be unveiling […] 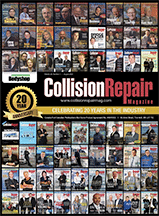