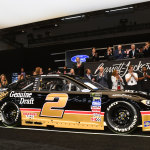 LAS VEGAS–(BUSINESS WIRE)–#barrettjackson—Barrett-Jackson, The World’s Greatest Collector Car Auctions, finished its 2019 auction season with its first 100-percent No Reserve collector car and automobilia auction in nearly a decade. With an amazing and diverse docket, Barrett-Jackson sold 677 vehicles for more than $33.3 million, while over 352 pieces of automobilia brought in over $855,800; both records for our Las Vegas event. In addition, $560,000 was raised through the sale of charity vehicles, bringing the total auction sales to over $34.8 million.

“Barrett-Jackson Las Vegas Auction was an incredible way to cap off our 2019 auction season,” said Craig Jackson, chairman and CEO of Barrett-Jackson. “We’re so appreciative of the consignors, bidders, sponsors and guests who played a role in the success of this fantastic event. Not only did we reach another important milestone with our first 100-percent No Reserve collector car and automobilia auction in nearly a decade, we hit a number of auction sales records as well. It was also a true highlight to host Roger Penske, one of the greatest automotive legends of our time. We’re excited to carry the momentum we’ve built up over the year to our 49th Annual Scottsdale Auction in January.”

“The diversity of our docket has been the force behind the success of our Las Vegas Auction this year,” said Steve Davis, president of Barrett-Jackson. “Our 100-percent No Reserve docket was filled with every conceivable type and caliber of vehicle that appealed to new and experienced collectors alike. From original muscle cars to Resto-Mods, customs and late-model exotics, that variety sets Barrett-Jackson apart. We’re extremely proud of the unprecedented amount of money and awareness we have raised for charity. We have generated over $560,000 in Las Vegas for a number of worthy causes, increasing our funds raised to date to more than $118 million.”

About The Barrett-Jackson Auction Company

Established in 1971 and headquartered in Scottsdale, Arizona, Barrett-Jackson, The World’s Greatest Collector Car Auctions®, is the leader in collector car and automotive lifestyle events, which include authentic automobilia auctions and the sale of high-profile estates and private collections. The company produces auctions in Scottsdale, Arizona; Palm Beach, Florida; at Mohegan Sun in Connecticut; and Las Vegas, Nevada. With broadcast partners MotorTrend (formerly Velocity) and Discovery Channel, Barrett-Jackson features extensive live television coverage, including broadcasts in over 150 countries internationally. Barrett-Jackson also endorses a one-of-a-kind collector car insurance for collector vehicles and other valued belongings. For more information about Barrett-Jackson, visit Barrett-Jackson.com or call 480-421-6694.