From pepperdust metallic to bamboo garden green, the list of insane names is nearly endless. Some, like Honda’s burgundy night pearl and Lincoln’s blue diamond metallic seem self-contradictory, others surreal—like Ford’s tangerine scream and moondust silver. Unusual as those name may be, they are not the ones we are celebrating in this issue of Bodyworx Professional. In this issue, we are raising a toast to the names that don’t just defy reason, but good taste as well. Here’s to you, nightmarish auto paint names!

In 2010, Italian OEM Bugatti suffered some embarrassment when it translated the name of its canola coloured schemes into English. Rather than using the word canola, the translation used the flower’s old English name—the rape. While Bugatti was quick to apologize for and change the name of rape yellow, it is not the only OEM to come up with a coating name capable sending shivers up spines.

Like Bugatti, one can only imagine that online translation services have played a role in turning perfectly serviceable names into terrifying ones. Volkswagen’s tornado red must make more sense in its original German—after all, it would take a truly disturbing scenario for a tornado to turn red. Likewise, whatever Hyundai’s iLoad creamy white means in Korean is (hopefully) lost on English-speakers. 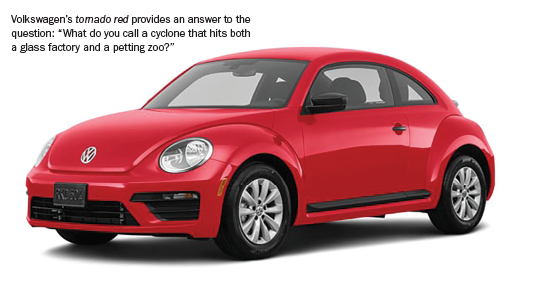 Not all hair-raising names can be
blamed on translation issues. Consider
Mitsubishi’s Labrador black metallic—
available to today’s drivers—which forces the mind to imagine what it would be like to have the pelts of many-a-beloved family pet stretched across the exterior of a vehicle. For Lexus drivers, their own version of the same shade is known as caviar—which a less graceful translator could have correctly rendered as clumps of sturgeon eggs.

Given the tendency for animal rights activists to respond to any number of contrived controversies, it is somewhat astounding that there has not been an outcry against Suzuki’s decision to call one beige option savannah ivory. The savannah roaming elephants of Africa are, after all, threatened with extinction by ivory poachers.

KNOCKING DARK OUT OF THE PARK

As an American OEM, one might expect Ford’s team to be aware to the sensitivities of the modern era. The still available grabber blue, however, breaks this illusion. It isn’t even the only option that appears to have drawn some inspiration from the U.S. President—winning blue is also available.

While Cooper Minis have remained a symbol of minimalist elegance for decades, its coating names are anything but. It offers customers the option of both a liquid yellow coating and black eye purple. 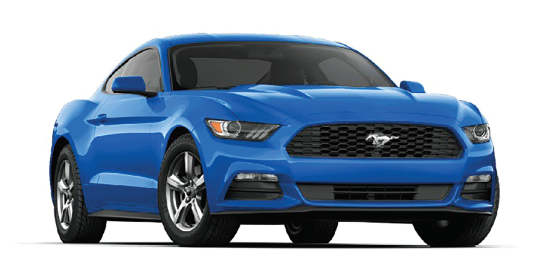