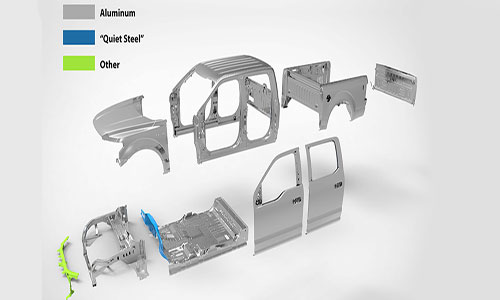 Until recently, aluminum was often seen as the domain of high-end vehicles. However, the original mid-market car, the Model T ford, used an aluminum hood. In The Mix research from Frost & Sullivan shows that while steel will continue to dominate, other materials are closing the gap. These graphs show current and projected material use across all classes of automobile.

There’s a drive to save weight in the automotive world, brought on by a double whammy of tougher emission standards and increasing fuel prices. Luxury brands such as BMW, Mercedes-Benz, and Jaguar, have used aluminum frequently in body applications, but the introduction of the new aluminum bodied ford F-150 this year signals a shift.

Aluminum will likely continue to make inroads in the mid-market segment, while the high-end brands are including more carbon fibre and specialty plastics in new vehicle design. Even steel has been transformed in recent years. High-strength steel and ultra-high strength steel are not new, but steel manufacturers are constantly innovating, with lighter, more durable products coming to market. Steel still dominates in automotive construction, and it’s no surprise that steel makers want to keep it that way. Steel accounts for about 70 percent of all vehicle materials, according to independent research firm Frost & Sullivan. Aluminum accounts for another 9 percent or so, while all plastics, including carbon fibre, only take up about 8 percent of vehicle weight.

Don’t get too comfortable with those numbers though. According to Frost & Sullivan’s research, we’re likely to see a reduction in steel and an increase in everything else, especially aluminum. Aluminum vehicle construction is certainly not new. Cast aluminum body components were in use as far back as the turn of the last century. The Great arrow, a vehicle introduced by pierce-arrow in 1905, used cast aluminum in the sidewalls and doors. Sheet aluminum started making its first appearances in the 1920s and 30s. In fact, the Model T Ford featured an aluminum hood. So much for the myth that aluminum is just for the luxury brands!

However, automotive engineers rapidly turned away from aluminum. Increases in engine power meant saving weight simply wasn’t as important. Other factors made steel king, and those factors still largely apply today. First, steel is much less expensive than aluminum. Second, there was more experience generally in working with steel, processing it, and repairing it. Steel rose to a position of prominence, but aluminum car bodies never disappeared completely. The luxury and performance markets continued to use it on a regular basis. However, aluminum has and will continue to make the transition to more common vehicles, while the high-end manufacturers will increasingly turn to carbon fibre and other “exotic” materials to accomplish their objectives. It’s impossible to predict the future with any accuracy, but we suspect that those materials will increasingly make their way into the mid-market automobile. As new technology is developed, high prices will not remain a barrier for long.

Rumours started circulating about Ford’s new aluminum pick-up several years ago, and most of those rumours ended up being confirmed when the truck was launched in late 2014. Since then, numerous people in and out of the industry have racked up real world experience with the 2015 F-150. A widely circulated report from Edmunds.com showed a door repair as taking approximately twice as long as it would have with a steel door. Ford president and CEO Mark Fields responded to this concern during a recent earnings call held by Ford motor company. “We saw the Edmunds report, and unfortunately, the experience with that, the dealer was incorrect,” he said. “The amount of time to repair based on the standards that we’ve developed and also shared with the dealers, it would’ve been about half the time.”

Fields also said the design of the F-150 was modular, to allow for repair efficiency. This might mean that it would have been more cost and time effective in this case to replace rather than repair the panel. An aluminum F-150 panel costs the same as a steel one. Edmunds.com also did not use a facility trained for the new F-150 when they did their test. Over 750 dealerships and more than 1,000 independent facilities have now been certified on these repairs.

No matter what you think of them or how long they take to repair, you are going to see them at some point. According to Fields, the new aluminum F-150 is in high demand. “We are seeing very strong demand for the F-150,” says Fields. “It’s our fastest-turning vehicle on the lot.”

A breakdown of body panels in the new F-150. While aluminum clearly predominates, it may be the joining that’s most unusual. There are only two areas where it is spot-welded. All other joins are made with adhesives and self-piercing rivets.

RIVIAN IS READY As of late September, Transport Canada has authorized Rivian to sell vehicles in Canada. The news came