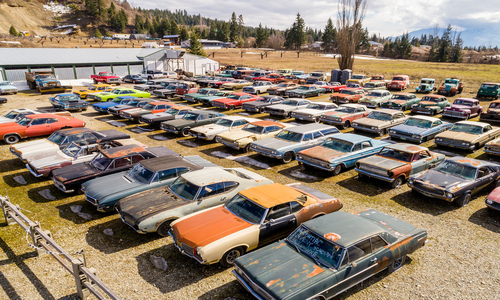 Mike Hall, a British Columbia man, is selling a 5-acre property in Tappen, B.C for over 1.5 million dollars. Land in British Columbia has been expensive as of late, thanks to their booming housing market, but $1,500,000 for a five-acre property outside of the coastal urban-centres would normally seem like a stretch. Such is not the case with the property of Mike Hall. $1,500,000 is completely reasonable considering the wealth you’re getting with the property – in the form of hundreds of parked cars and loads of deadstock OEM parts.

The Cars, which range from turnkey to terrible, are valued between 500-30,000 dollars each. The most valuable vehicles having been taken great care of and restored – Amongst the rarer cars to grace the lot are a row of 55-57 Chevrolet two-door station-wagons, a 1926 Chevrolet Roadster pickup truck, a 1927 Ford Model T pickup, a collection of Dodge Super Bees, and one of only 45 Pontiac Beaumont Sports Deluxe models, which were made for the rich and famous and came equipped with a v8 and four-speed manual transmission.Mike himself restores cars, and his daily drivers are a Chevrolet Firefly Turbo Coupe and a 1968 Chevelle with a big-block 396 CI V8, which he has owned for 30 years after restoring. His property is described not just as land and buildings, but as a once in a lifetime opportunity.

More interesting perhaps to the body-techs and collision repairers amongst us are all of the thousands upon thousands of rare and unique OEM body-panels, lights, interior components and more that come with the lot. Old cars can be notoriously hard to restore to OEM specifications if they’ve been in a collision, and to insurers, they’re far easier to write-off due to the extremely expensive nature of OEM spec parts. Even rarer are the plethora of deadstock parts that come alongside the property as part of Hall’s collection for restoration and repair.

Per Driving.ca, the collection started when Hall began his job climbing cliffs and getting boulders off of plateaus so that they wouldn’t fall down and crash onto cars. He wouldn’t have found much to do in Ontario or any of the plains, but in B.C, thanks to their mountainous geography, he made a mint. According to Driving.ca, Hall Says, “I was away 10 months of the year working around the province. I made more money than I knew what to do with, so I would buy cars all across B.C.”

“I started accumulating cars when I was 20,” says Hall per Driving.ca, continuing to say “First it was 50 cars. Then the collection grew to 100. I bought more and more. It’s easy to buy them when you’re working. It’s like an addiction. With 100 cars, 200 seemed better, and now it’s well past 300.”

If you’re interested in purchasing the property, you can contact Listing agent Hudson Purba of Century 21 Desert Hills Realty in Kamloops.