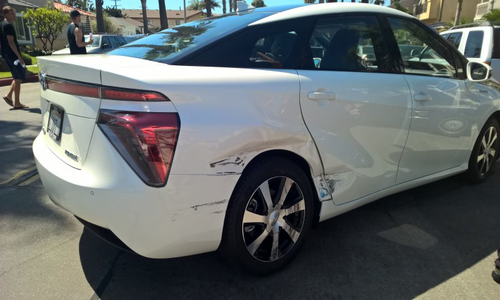 If you’re worried, as a collision repairer, about exploding batteries, fire-prone wiring, or the cold-war connotations of “Hydrogen” as a prefix to anything, don’t be. As Toyota amongst others reveal their hydrogen powered and more heavily developed electric vehicles, questions arise as to whether or not the same old tricks work with these new technologies?

Thankfully, for the most part, replacing, or welding, a new body panel or frame or what-have-you will pretty much always be the same. Since the earliest days of Collision Repair, body panels, frame straightening and the like have gone through some major changes, but the fundamental act of what you are doing – fixing or replacing a part – hasn’t much changed. The same is true looking into the future for hydrogen and electronic vehicles.

Where companies such as Tesla implement breakers which turn off the cars batteries and completely cut all currents once collision detectors are tripped, Hydrogen powered cars rely on new safety features, most of them unique to the new and not as oft-used fuel cell type. Safety features are important on both models like the Tesla Roadster and a hydrogen-cell car like the Toyota Mirai, as they both have unique dangers associated with them. Hydrogen is a well-known potentially explosive gas, and the Tesla Roadster has over 7000 lithium-ion batteries, each and every one of them capable of creating a massive amount of energy if things should go wrong.

Toyota isn’t too worried about the Mirai though. Nor are other companies who are putting significant R&D into hydrogen-cell-run-vehicles. According to Dr. Frano Barbir, Professor and Chair of Thermodynamics at Faculty of Electrical Engineering, University of Split, Croatia, the risks associated with hydrogen, despite their H-Bomb connotations, are far less than those that can be associated with Gasoline. “Due to higher sonic velocity, hydrogen would initially escape much faster than natural gas.” he says, adding “Since natural gas has more than three times the energy density than hydrogen, a natural gas leak will always contain more energy. If a leak should occur for whatever reason, hydrogen will disperse much faster than any other fuel, thus reducing the hazard levels.” This can be seen as sort of a natural safety feature of using hydrogen; despite its propensity to explode well when it’s atoms are split, in every day application it’s actually safer than what we’ve all been driving around with for the last century or so; doubly so when in a natural atmosphere. The chances of natural hydrogen explosions in the normal atmosphere are incredibly low. Barbir says “Like any other fuel or energy carrier hydrogen poses risks if not properly handled or controlled. The risk of hydrogen, therefore, must be considered relative to the common fuels such as gasoline, propane or natural gas. The specific physical characteristics of hydrogen are quite different from those common fuels. Some of those properties make hydrogen potentially less hazardous,” explaining, “the likelihood of any detonation depends in a complex manner on the exact fuel/air ratio, the temperature and particularly the geometry of the confined space. Hydrogen detonation in the open atmosphere is highly unlikely.” This is to say, if you’re driving around and you get hit, your Toyota isn’t going to explode. In fact, it’s likely just as safe if not safer than a traditional gasoline combustion-engine car, and the results say the same thing, in fact, a Microsoft tester for the Toyota Mirai was recently in a collision, where, drumroll please…. Nothing happened.

That’s right! As Xbox AOL director Randy Shaffer was test-driving the Mirai, he was crashed into, with no Hindenburg-esque explosion to show for it, just a dented fender and a need for a new-rim. Easy-peasy repairs for any seasoned collision repairer. Shaffer says, per Autoblog, “Out of the corner of my eye I saw a black, ’90s-era BMW 5 Series smash into my right rear-tire panel. The Toyota driver also saw it out of his eyes and was hoping she would just miss us. She had a stop sign but either didn’t see me or was trying to shot the gap between me and the other Mirai. End result, at about 15 mph (best guess) she hit my Mirai right in-between the two Hydrogen tanks and directly into the main battery.”

I’m certainly impressed and excited about the future of Hydrogen-cell cars, and especially excited to see what other safety features become commonplace in the future. What do you think? Let us know in the comment section below!