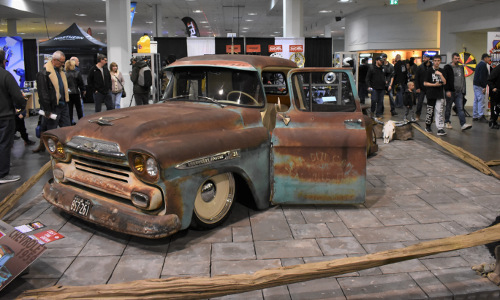 Here’s one to make all you painters and paint techs shake your head in confusion! Patina-finished hot-rods were all the rage in the showcar category at Motorama this year, defying conventions as well as conventional paint-jobs. Of the rust-clad rat-rods were a 1959 Chevrolet Apache, a 1954 GMC 9100 heavy-duty, a flat-head-v8 equipped 1940 Ford, and more, their owners all choosing to keep their cars’ naturally-aged finishes rather than repainting or refinish the vehicles.

If the painters amongst us are wondering just why in the world somebody would skip out on the painting process, the answer is likely two-fold, with a modifier to the second possible answer. The first answer is cost-effectiveness. Patina ‘paintjobs’ came to be with the advent of the rat-rod in the late 60s onward. Rather than restoring or ‘hot rodding’ cars, racers and grease-monkeys would make their cars driving purposed, rather than show-purposed. Where they could save money on paint they would, and chose instead to put those resources into superchargers, bored-out-engines and forged components. In short: they didn’t want to look pretty; they just wanted to go as fast as possible on as little money as possible.

This evolved into the second reason many cars kept their rust: the looks. Believe it or not, as more people saw these rusty speedsters driving around, the styling caught on, and at any show now you’ll see a collection of patina-clad and rusty hot-rods. The subculture has its roots in classic Americana, but it’s sort of evolved on its own now to something completely different, with imported cars donning the rust just as often as American cars – drift missile Nissan Silvias with rusted hoods or even rusted-in designs (such as the car’s logo or a rising sun) are common on the drift track and in D-series races.

Fear not, though, paint techs! All of that rust can be bad for a frame and body unless properly done and properly clear-coated afterwards! Now that the culture is more about the look than doing things as cheaply as possible, there’s plenty of room for the spray-booth when it comes to building a rat-rod! Clear coating and sealing is the way to go with these cars, so that their age can show, without harming the structural integrity of the car or truck!

PrevPreviousRags to Ragtop: This Fat Fender ’35 Ford has never looked better than at Motorama 2017
NextBarett’s Blog: Hydrogen-fueled hijinks won’t end like the HindenburgNext