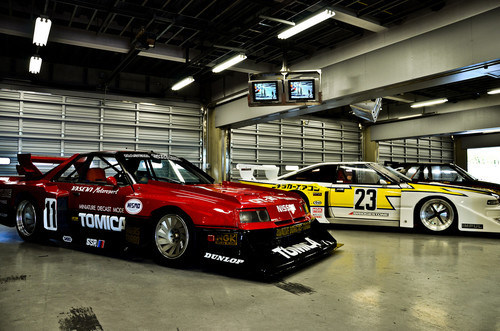 Tokyo Auto Salon is a relatively unique show in the wide world of automotive expositions and car shows. It’s unique partly because of its sponsors, and partly because of the unique cultures of Japan as a country and as a consumer within the automotive industry. One thing that separates Japan from the rest of the world, with the exception of leagues of ocean, is that Japan has potentially the highest prevalence of modified cars in the world. While the United States has its heart-throb gassers, hot-rodders and muscle-cars; all proponents of the kustom kulture of grassroots USA, Japan has pretty well everyone beat out when it comes to the sheer grandiosity of modifications. From flashing-light covered trucks, to completely customized vans which bear no resemblance to their stock variants, autobody businesses in Japan are host to all sorts of diverse requests to cater to all the diverse modification cultures in the country.

The Japanese car modification scene objectively started with Bosozoku, a motorcycle gang culture in post-war Japan. For them, the most important thing was to ride quickly, ride loudly, and modify their motorcycles in crazy and oftentimes illegal now. This soon spread to cars, and like with their motorcycles, they went above and beyond, adding race-inspired boxy fenders, lowering their cars to an almost ridiculous degree to obtain negative camber, and adding on ridiculous customized and shaped exhaust pipes. Bodyshops in Japan made a killing off of these guys in the 1970s, even if some of their modifications were less than legal. While the culture has almost completely died down in the present day, the impact it had on the culture of Japan have been long felt; modern drifters still lower and camber their vehicles to a ridiculous degree, and style reigns supreme in the country, sometimes (though certainly not always) over performance.

Though style is the king when it comes to the work autobody shops do in Japan, they also see their fair share of performance based-modifications. An example of this is for the infamous Kanjozoku street-racers: a shady and underground group of street-racers who sit behind the wheels of race-bred Civics. The idea might be funny to some on this side of the pacific, but the Kanjozoku racers are frequently behind the wheel of 500+ horsepower Honda Civics, requiring bodyshops to reinforce frames far beyond stock.

Painters and autobody refinishing technicians also find themselves busy at the hands of the Kanjozoku, as colour and decal changes are pretty well standard for the culture. The constant refinishing and repainting of their vehicles on a weekly-or-so basis stemmed originally from the need to stay anonymous from Police officers, but quickly evolved into a part of the showmanship around the culture. It certainly helped to keep Osaka’s Paintshops prosperous.

It’s as a result of all of this and more that the Tokyo Auto Salon is such a big deal. It’s sponsored by the aftermarket companies themselves, and sees millions of people come through its door to admire the widely modified vehicles. As a result of the many independant modification cultures that exist in Japan, the show sees all sorts of automotive enthusiasts, and all sorts of companies. Rather than just keeping up with modern trends, TAS caters to all tastes, including the eclectic. For more on the TAS 2017, check out some of our other articles on the Home Page.