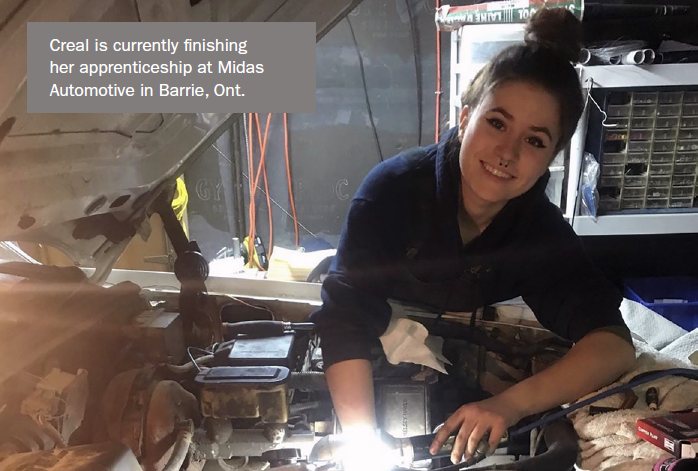 SHE MAY BE THE ONLY GIRL IN CLASS, BUT CENTENNIAL STUDENT ALEX CREAL NEVER FEELS OUT OF PLACE ON THE SHOP FLOOR

It is a truth self-evident that women are underrepresented in Canada’s trades. According to Stats Canada, women aged 25 to 34 make up just three percent of the workforce. For those who do, however, many find themselves in richly rewarding careers. Twenty-year-old Alex Creal hopes to become one of them. Now in her second year as an automotive service technician at Centennial College, Creal hopes to one day up her own shop. While she may be the only woman in her class, Creal has no doubt about her ability to make it within the auto repair industry— something that was sparked in her childhood. “I have always loved playing with cars, ever since I was little,” she says.

It wasn’t just her childhood toys that inspired her interest in vehicles. Growing up, her mother worked as a saleswoman at a car dealership—and Creal learned all about the vehicles she sold.

In Grade 10, Creal enrolled in an automotive program which gave her a taste of the profession and left her wanting more. Two years later she completed a co-op program at Stouffville Nissan dealership, where she performed oil, tire and brake changes. “This was a starting point for me, now I have a lot more experience working on vehicles,” she said.

Fast forward to two years later and Creal is now working as an apprentice automotive technician at Midas Automotive in Barrie, Ont. She works on anything from vehicle alignments to changing front and rear end parts. “The list goes on,” Creal says.

Even though she isn’t the strongest technician in the shop, she acknowledges that she can do pretty much everything the men can do. “My challenges are having the strength for small things. Tires I don’t have problems with, I have managed my way with that but leverage on certain bolts, nuts, screws are for sure a challenge for being a small woman in the shop. Working on tall lifted vehicles is something I also struggle with, but I find my way around it.”

This isn’t it for Creal, she says she might expand her knowledge in the trade. “I’ve been thinking about other programs I could take such as heavy-duty mechanics … I have a passion for electrical as well.”

Entering these trades as a woman can be intimidating for some, but Creal believes in a very different approach.

“You will always have people putting you down, saying you’re too small or you’re a female or not strong enough,” she said. “You learn just like any human being, and if you’re interested in something you shouldn’t have others putting you down. Everyone starts from the bottom and makes their way up.” 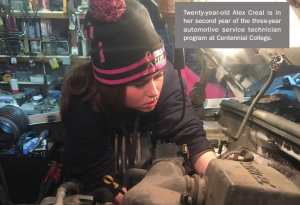 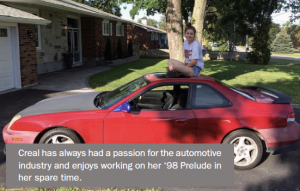