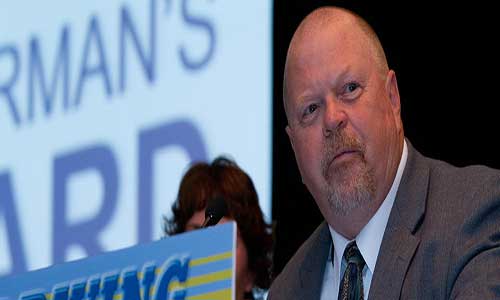 There’s really no way to be certain where you’ll end up when you start on a journey. The destination you had in mind when you started may shift along the way.

That might be the case for Robby Robbs, CEO of Nocona, a consulting firm servicing companies in the automotive, insurance, and related industries. The firm’s typical client is a fortune 500 company, often with a global reach. The boardrooms of top corporations may seem like they’re a long way off from the production floor of a collision repair facility, but Robbs found a direct path.

“It started in high school when I took automotive classes. I had an interest in cars from a young age, but I hadn’t quite decided if that was the career I wanted,” says Robbs.

In 1974, Robbs was working at a service station pumping gas. While it wasn’t much of a career, it was a job, and it helped that he was already interested in cars. He asked management if they could sponsor him as an apprentice, thinking he might become a mechanic, but they couldn’t.

Instead, Robbs turned to the collision side of auto repair. He had an uncle who was in the collision business, with a location in his hometown of Ottawa. His uncle was willing to sponsor him as an apprentice technician and painter, and soon he was on his way.

“It was an interesting lesson,” says Robbs. “Sometimes we’re not really sure what we want to do in life, and we kind of land on things. It doesn’t always work out, but generally, if we work at it ends up being a perfect fit.”

Robbs was soon enrolled as an apprentice technician at Algonquin College in Ottawa. He served out his apprenticeship, completed his hours, and within a few years had the qualifications to become a journeyman technician.

While he worked for his uncle at first, Robbs also spent time at other facilities over the next seven years. Movement was pretty rampant in the industry at the time, so there was nothing unusual in this. However, his uncle came into Robbs’ life again when he pointed out that there were opportunities not just for those who were technically competent, but also for those with management potential.

I started to learn how to write estimates, started learning how to do bookkeeping and scheduling, and how to monitor other people’s work to make sure production stayed on track,” says Robbs.

He continued working for his uncle for another few years, and then took an opportunity with Turpin Pontiac Buick. He stayed on as assistant manager for the next 10 years.

“After that 10 years, I realized that I was rather limited in terms of how much further I could go,” says Robbs. “Frankly, I felt that I was capable of more. I just wasn’t sure how much more.”

Around this time, fate stepped into the picture, in the form of a phone call from insurance firm The Co-operators. Robbs wasn’t sure at the time if he wanted to become a permanent part of the insurance industry, but the opportunity was one that suited his skills and presented a challenge.

“This was back around the time when the industry was first looking into direct repair programs,” says Robbs, referring to what is now a common part of the industry. “I was responsible for the implementation of The Co-operators direct repair and cost analysis programs.” Robby Robbs delivers a presentation at an industry conference. Skills he developed as a working technician have continued to serve him as a consultant to international corporations.

Robbs was not a full-time employee at that time, but an independent contractor. He soon joined the firm full-time as regional auto physical Damage Manager, and within a year was promoted to the national level, overseeing the company’s programs and processes across Canada.

He was with The Co-operators for approximately the next 10 years. Up until this point, one step in his career had followed the next in a relatively logical and straightforward manner. The next step for Robbs, though, was anything but straightforward.

I left the company in 1998 and acquired a fledgling company called Vital Innovations,” says Robbs.

It was a move that surprised many of his colleagues. Many of them thought he had gone crazy, and looking back it’s easy to understand why. Robbs walked away from a multi-billion dollar corporation, the largest insurance company in Canada at the time, and one where his personal area of responsibility was around the $900 million mark. Vital innovations, on the other hand, was only doing around $300,000 a year when it was purchased by Robbs.

I sold that company five years later,” says Robbs. “We had turned it around so that we were doing about $36 million a year, and I say we because it took a lot of dedicated staff that believed in my vision.”

It was a decision that paid off in the end, but why did Robbs make it in the first place? Leaving behind job security for an uncertain venture isn’t easy.

“It started when I realized that there was no such thing as job security except for what you build for yourself,” says Robbs. “A new CEO at The Co-operators issued a mandate that we had to reduce the size of our organization by 25 percent, and I was part of the process for deciding the fate of a large percentage of our staff. I asked myself what those folks would say if I asked them about job security.”

As Robbs notes, job security isn’t something an organization gives you.

“When you accept a position, you’re also accepting a certain lifestyle,” says Robbs. “The market determines what you’re worth. It says if you’re an astronaut, then you’re worth this, if you’re a doctor, you’re worth that. Frankly I never liked the idea of anyone telling me what I was worth.”

It was this realization that put Robbs on the road to entrepreneurship. The decision to purchase Vital Innovations wasn’t made in haste or without due consideration.

“They had done some very interesting things, and I saw an opportunity to commercialize a lot of their technical products,” says Robbs. “I thought it wasn’t a particularly risky venture, the way I was planning to move forward, so I involved all the right partners and relaunched the company.”

During his time as CEO, Robbs also launched a subsidiary company called InsuroCity. Essentially it was a claims-management platform that allowed insurers to automate and streamline claims adjudication and service provider management via the internet.

The world has changed so much that it might be diff­icult to recognize just what a leap forward this was. InsuroCity coordinated the flow of information and decisions between claims adjustors, service providers, and product providers in real-time, offering them new opportunities to control the costs of claims management processes, and to enhance customer service levels. Everyone could work with the same information at the same time.

Robbs tried retiring at age 45, but it didn’t work out.

“I received a phone call from AkzoNobel, asking if I would be willing to launch a company for them,” he says. The company eventually became known as Nobilas, a service organization for insurers seeking a way to outsource their claims practices. Robbs stayed with Nobilas until AkzoNobel decided to divest all of its non-core related activity and sold the business to a group in the UK.

“I thought I could try retirement again, but I was only 49, and realized I still wasn’t ready,” says Robbs. “I had received some phone calls to do some consulting, but I had no intentions of becoming an industry consultant.”

Robbs says the number of calls made him reconsider his position.

“I got to thinking about it, and realized it would allow me to think strategically, continue to be in charge of my own value, and only take the work that I found invigorating,” he says.

He founded NuCon Services, consulting to automotive, insurance, and related industries. The firm has helped many clients find greater success, profitability, and efficiency over the years, but Robbs plans to wind down operations in May 2015.

“I’ve come to the conclusion that retirement is not an end, rather a state of mind that suggests one can do what they want, when they want and for the reasons they want. In many ways this defines the last 15 years of my career so I’m fortunate in that regard, particularly when I consider that during those early years, I really had no sense of what I wanted to do in life. While I plan to end my consulting practice, I intend to remain involved with governance where I can continue to play a role in the strategic side of business,” he says.

No one would begrudge him a chance to relax. It’s been a long and productive career, and he says he owes it all to where he started.

“There are people who see this trade as a dead end industry, but I believe it’s anything but,” he says. “I used the industry as a vehicle to get to different places and learn different things along the way and it’s been a remarkable ride.”

The industry has changed significantly since Robbs started his apprenticeship in 1974, but there are still opportunities for entrepreneurs willing to work hard.

“I am truly impressed with some of the younger talent we see in the industry today, like Steve Leal at Fix Auto, Michael Macaluso at CARSTAR, Tony Canade at Assured Automotive, and many others,” he says. “There are a lot of brilliant minds in this industry today, and they’re going to create a whole slew of new opportunities.”

“The next thing would be to develop a business sense,” says Robbs. “If someone is academically inclined, any business program will help them out. If you’re not academically inclined, take a look at the environment you’re in and look at the next best opportunity. You might get into appraisal, estimating, or management, and then develop those skills.”

Robbs has shied away from lateral moves, saying there’s no value in just moving around.

“If I was going to make a move, it would be a step up,” says Robbs. “There had to be more money, greater opportunity, or more responsibility. Avoid moving just for the sake of moving.”

Practical skills aside, Robbs says advancing yourself is more a matter of attitude.

“Be portable and willing to travel,” he says. “Don’t limit yourself to one industry. Look at all of the industries associated with your starting industry. This could be insurance, the OE, or the supply side. Be willing to expand your horizons and don’t put limitations on yourself.”