Passion for the Work 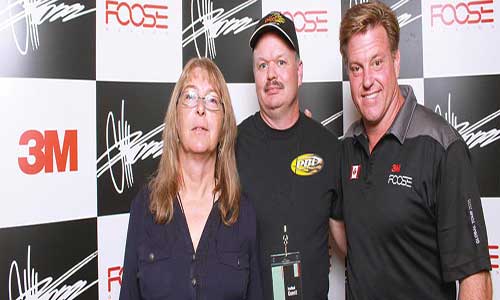 Jeanne Marriott got the chance of a lifetime recently, when it was announced that she was the winner of the 3M Accuspray System Spray Gun Meet Chip Foose contest. The prize included an all-expenses paid trip to Calgary as well as a chance to meet Foose and discuss his work.

Although in this case, they ended up discussing some of her work as well. Jeanne’s worked in the industry for a number of years. She and her husband run Painted by Dave, a shop in Blenheim, Ontario that does customs, restorations and collision work. Jeanne focused on bookkeeping, front office and administration, but she wanted to do more.

“A few years ago Fanshawe College was running a pre-apprenticeship program and I took a student down for the open house they were running. I decided to sign up myself,” she says. Learning more about the technical side of the business was something Jeanne had always wanted to do, but between raising kids and building a business, there never seemed to be enough time.

“My youngest moved to Toronto right after graduating high school, and the timing just worked out,” she says. “I said to David ‘I’m going back to school!’ He said ‘What the devil took you so long?’” Jeanne completed her Level 2 Apprenticeship last summer, and will complete her Level 3 in November or December of this year. Her passion shows in her school record, making the Dean’s Honor Roll for both her Level I and II. She was also chosen to receive the Tom Haggerty Memorial Award in 2014, given to the student who most represents dedication and passion in their chosen profession.

“We’re a mom and pop shop,” says Jeanne. “We’re trying to find individuals who are passionate about the work itself, not just there for the paycheque. We’ve had employees off and on in the last 10 years where my husband had to go over their work. One day, I was looking at very poor work, and said, ‘I could probably do a better job, because I care about what goes out that door!’ That’s when things started to fall into place.”

Jeanne went out of her way to give something back to her school. When she met Chip Foose, she had him sign a Fanshawe College t-shirt, and draw a truck on it. She’s donating the shirt to the school’s Auto Body Repair program. Jeanne and Dave are both fans of Chip Foose’s work and his program Overhaulin.’ “I’m very much a fan of the work he does and I usually try to keep tabs on what he’s got coming out at SEMA or when he’s got a car at Autorama,” says Jeanne. “He is such a nice person and very easy to talk to.”

Foose is well-known for making a point of including his entire team when it comes to giving credit. This strikes a chord with Jeanne. “That’s the way we run our business,” she says. “We’re about each individual having done their part of the end result, and acknowledging that. That’s his philosophy as well. It’s who he is.” Jeanne says winning the contest and the trip itself were both amazing experiences. “3M was absolutely fantastic throughout the whole process. They handled everything,” she says. “It was actually a little overwhelming, but the overall experience was really great. They really rolled out the red carpet.”

One particular highlight for Jeanne was finding out Chip is an admirer of a car that Painted by Dave sent to Autorama one year. “Chip was so taken with the car at the show that he went back a couple of times to talk to the owner,” says Jeanne. “When I brought it up, he said ‘I’ve got pictures of that car!’ It was nice to see that our work had made such an impression.” Painted by Dave does restoration and collision work, but it’s the custom builds that really excite Jeanne.

“We love the custom builds because we work hand-in-hand with the owners,” she says. “A lot of the time they come in with an idea, and we work with them very closely to make sure it matches up with the picture in their head.”

There’s another aspect to Painted by Dave that Jeanne’s very proud of: the work they do with local high schools. “We work with all five of the local high schools,” she says. “We always take on one or two students per semester, and we do recruit from the girls quite heavily. We’ve put five young ladies through the co-op program.

They might not end up pursuing it, but the young women we’ve had here are always pleased to develop some solid skills.” The pride is evident in her voice when Jeanne speaks about the young women she’s mentored and helped along the path. While not all of them pursue a career in collision, some do. “We have one young lady who’s about to wrap up her Level 3,” says Jeanne. While they are of different generations, there are some similarities between this student and Jeanne that are easy to spot: they’re both women in a male-dominated industry and they’re both about to complete their apprenticeships.

We also suspect Jeanne’s passed on her most important lesson: a passion for do-ing the very best job possible before the car goes out the door.

For more information on Painted by Dave, please visit paintedbydave.com.

PrevPreviousPushing Forward
NextDistilled experience: an examination of the careful teamwork necessary for any custom car buildNext