Success is not a straight path—ask Jamie Gray 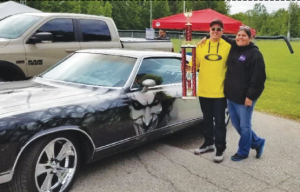 At the end of 2021, Assured Automotive presented Jamie Gray, a graduating student of Fanshawe College’s 310B Program, with the Jerome D’Silva Memorial Award. Typically, awards are given to those who perform best in their realm; and while Jamie did graduate with a 3.84 GPA, the chief legacy of this award circles around the values of Honesty, Integrity and Respect the recipient display amongst their peers and community.

Jamie’s story entering our industry is humbling, and daily he makes sacrifices to support those around him. From a young age, Jamie says his mother was bluntly honest and did her best to prepare him for life. He knew that, if he wanted to go to college, he would have to pave that path himself.

Jamie had been interested in collision repair since he was a child. Influenced by his father, a body technician, and his uncle, a painter. Dealt an enormous challenge at 16 years old, Jamie was forced to drop out of school and find a career. After working various roles, he found a gig as a tow truck operator, where he stayed for ten years. But Jamie still wanted to get into collision repair. It came down to a point where Jamie would be on a drop off job and he would be asked if he knew any technicians looking for work.

Finally, Jamie asked – what do I need to do to become a technician? Bill and Ben Weir, the owner and manager of a local collision centre, had known Jamie for several years and were familiar with the strength of his work ethic. They explained to Jamie that he’d need his GED and advised him to take a three-tiered program to become a technician. They would support him by taking him on as an apprentice to fulfill the practical experience portion. It all sounded great to Jamie, but there was a slight problem—he needed his high school diploma, and full-time school would not allow him to work simultaneously.

At this point, Jamie looked to his partner, Charlotte, to see if they could face the challenge together. She would be the only one working, and their family was about to grow—not by one, but by four; the pair had just completed the adoption of four siblings aged six through 15, in addition to already having one child. Jamie and Charlotte felt that, if they truly wanted to move their family forward, they’d have to take a step back. In 2020, Jamie enrolled in the 310B program at Fanshawe College. Tragedy struck soon after when Charlotte’s sister became ill and passed away. She had a four-year-old son, whom Jamie and Charlotte took in without a second guess. They became a family of eight.

For the next year and a half, Jamie buckled down to complete his required training. He had passion for the trade in addition to support on all fronts: at school, at home from his family, and from Bill and Ben. And Jamie’s advice to anyone thinking about getting into collision repair? “Don’t overthink it, just take the leap. If you have a passion for this, you’ll make it work.”

BIG FISH The adage, “like a fish out of water,” could soon been rendered ancient, thanks to Israeli scientists that

FOR THE FUTURE British Columbians and skilled trades employers will soon learn more about the economic value of apprenticeships, thanks

RIGHT FIT Both Bentley Motors and Ford made 3D-printing announcements to kick off the year, with the former announcing its 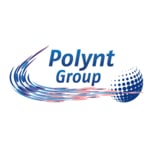 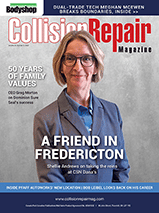