Red Bull Bus: Inside the world of corporate customs 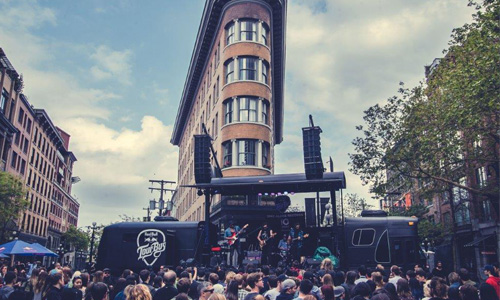 Abbotsford, British Columbia — August 31, 2017 — Showing off an eye-catching promotional vehicle is one thing. Having a one-of-a-kind, head-turning, jaw-dropping machine is quite another. While some companies are opting for simple wrapped vehicles to act as rolling billboards, brand leaders such as Red Bull, General Motors, Netflix and Tim Horton’s want promo vehicles that illustrate their sector leading organizations in a much more dramatic way.

“When we looked at building the Bus we had a specific list of deliverables,” said Lead Designer and Head Fabricator Daryl Francoeur. “They wanted it to drive like a tour bus, sound like a rock concert and set up as easy as a tent trailer, and that’s what we delivered.”

The Red Bull Bus is an example of true automotive (and engineering) ingenuity. Built from a Freightliner chassis, the Bus was completely torn down at  360 Fabrication’s 22,000 sq. ft. shop in Abbotsford, BC, and rebuilt from the wheels up. The Bus includes a fully cantilevering sound stage that unfolds in less than 10 minutes from within the centre of the bus. At 45-feet long and equipped with a 120,000-watt sound system, the Red Bull Bus is said to be the loudest rolling sound stage in North America. Fully outfitted for its rock star guests, the Bus has specially designed big screens fitted with Xbox gaming systems; cooling for your favourite pre-concert beverages as well as a full sound control room. On top of all that, the Bus fully embraces the subtle art of looking good, even when standing still.

360 Fabrication has built a series of custom Suggas for Red Bull. Built off diesel F-350 Ford pickup trucks that are custom fitted with 1957 Volvo military vehicle bodies, the Suggas are used to “bring the brand and the funk” to events across Canada.

It doesn’t end at Red Bull. 360 Fabrication was recently hired by a popular Netflix show to produce a working concept vehicle imaged for the production. 360 brought to life the fictional vehicle, a wide-bodied, hot pink convertible, created entirely from scratch. The design was so popular that it has now been recreated as a Hot Wheels toy car.

360 Fabrication also recently completed two specialty projects for GMC. The first was to build a custom ski lift gondola designed to replicate a Denali pickup truck. This experiential promo project gave skiers the exterior visual of the truck, right down to the hood, bumper, working headlights and taillights. Inside, the gondola was fitted with a replica of a luxury Denali interior. The project drew international attention for its creativity and attention to detail, right down to the custom rock-bed 360 Fabrication designed and built for the gondola “truck” to sit on.

Additional modifications included a full LED lighting system and over the top sound system. The truck has since been featured in auto shows, TV commercials and internet videos showing the Sierra racing up the sides of snow covered mountains in Whistler, British Columbia. The resulting internet sensation has been featured in reports from around the world.

360 considers it an honour to work on another corporation’s promotional vehicle, an extension of their corporate identity. Francoeur noted that commercial builds are a great way to show off his company’s creativity and diversified skill set. “No matter what company we’re working for, the expectations are always the same: they have tight timelines and high expectations, which is why we love this kind of work. If they can imagine it, we can build it.”