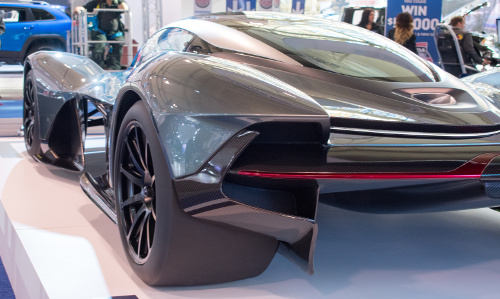 The 2017 Canadian International AutoShow was host recently to the global reveal of the Aston Martin AM-RB 001 hypercar. The AM-RB 001 is set to feature 1,000 BHP per ton, a ludicrous amount of power, alongside a carbon fibre chassis and body, and intense body-styling that would send anyone’s imagination racing.

Like the Lamborghini Aventador, the AM-RB 001 will feature parts borrowed from F1 vehicle design, including mostly carbon fibre body components, and a completely carbon fibre frame: virtually unheard of in the world of road cars. This may make collision repair for the car more difficult, as the splinters and shards caused by damage to carbon fibre are not nearly as easy to mend as traditional metals.

That’s another important fact: the AM-RB 001 is set to be a completely road-legal production vehicle. Though it will certainly feature a limited run, it’s not as if the British hypercar will be track only. Aston Martin will, however, offer a track-oriented variant, with less in the way of seating and higher horsepower. Both models will also feature featherlight rims, attached by a single locking mechanism at the centre of the tire, much like an F1 or NASCAR circuit car. Similar to an F1 car as well is the massive engine which powers the AM-RB001. The engine at the heart of the car? A newly designed, mid-mounted, high-revving, naturally aspirated V12 engine with the potency to achieve a 1:1 power-to-weight ratio. This is an incredibly rare feat in the automotive world.

The car is poised to be completely bespoke, as well, and Aston Martin has set up their hypercar factory to handle the AM-RB001 being completely hand-made by David King, Chief Special Operations Officer at Redbull Racing, and his team at Gaydon. The same facility was used to forge the Aston Marten One-77, another premier hypercar offered by the British company. The One-77 was limited to a run of 77 units.

Like the One-77, the AM-RB001 will be a limited production model, with both a track-oriented and road-oriented version going up for sale. Even the road version looks ready for the track, however, and seeing the vehicle up-close and personal at the AutoShow was an incredible experience. The angles look futuristic and incredibly sharp, almost confusingly so, and the body fitment and finishing is absolutely perfect, leaving nothing to be desired; proving that carbon fibre, though more difficult to repair, can make one incredibly attractive automobile.