Living Legend: Inside the world of Yosemite Sam Radoff 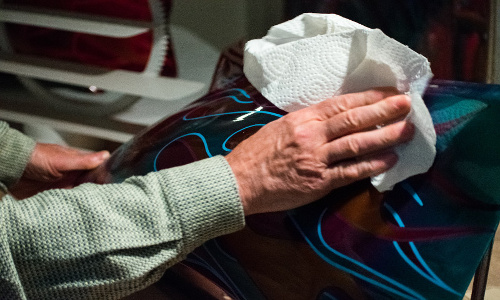 Delaware, Ontario: Yosemite Sam Radoff has built bikes for Evel Knievel, been featured in Truckin’ magazine and sculpted for Tim Allen. He’s custom-built and painted thousands of motorcycles and cars in his time, and was even sued over his name, once. He won, after proving that he’d been “Yosemite Sam” even longer than the popular Looney Tunes character. He’s painted concept cars for Chrysler, and almost painted a Chevelle for Thomas Hearns, the first boxer in history to win world titles in five weight divisions, but ended up kicking him out of his shop for being rude. He’s been named in the Mack Brush Pinstripers Hall of Fame, the Outlaw Customs Hall of Fame and was the winner of the inaugural Von Dutch Hall of Fame Award. Now, though, he’s changed his canvases from cars and bikes to fine sculpted art, garnering him places on several art councils and in countless galleries around Canada. But how did a poor kid from Detroit come to be such a prolific figure in the automotive and autobody world? Not through a formal education, that’s for sure.

“Well, back in our day we didn’t have any of the trade schools they’ve got today,” says Radoff. We’re sitting in the kitchen of his home/workshop. “If somebody wanted a chop-top 57 Chev’, and you’d never done that before … well, you’d just have to go on in and do it. Of course you could never tell the customer you’d never done it.”

Radoff was a firm believer in doing it yourself, right from the start. In fact, he’d been working on painting and customizing cars before he could even drive them. Nicknamed “Little Sam,” at the time, Radoff learned the trade through the shops he grew up around, his childhood years providing the background for the intricate custom work, world class pinstriping, and eye-catching flame jobs that earned him the handle “The Flame Doctor.” The looks are timelessly cool, but at the time, Radoff didn’t know that they were anything but a trend.

“Way back then, we didn’t know that the things we were doing were still going to be cool today,” he says “So of course we hardly ever took pictures of anything. I remember doing pinstripes for people in parking lots and at cruises on the cheap; I never thought anyone today would want to see them.”

Now though, Yosemite Sam knows the importance of what he was doing. “A certain car or a certain motorcycle can take you back to a different time. If you’re having a bad day, it’ll put a smile on your face, and that’s what I was in the business of. I liked putting smiles on people’s faces. I was there for the little guy.”

The transition from being an automotive artist to being a fine artist wasn’t too difficult for Yosemite Sam, who branded himself as Sam Radoff for his fine arts endeavors. The process wasn’t anything too new for him, and so he adjusted well enough to the new world. “I was used to doing paintings on pieces of metal that weren’t cars,” he explains, “What I would do, is that I would pinstripe or finish someone’s car, then do a piece of metal in the same colours and pattern, so he could hang it on the wall of his garage beside the car. The car might be busted or scratched up in a few months or years, but that painting on the wall would stay fresh indefinitely.” This is why it was such a small step for him to start sculpting once he had the background in automotive customization. In fact, the tools of the trade have remained relatively the same, he says. Radoff still uses the same paints and brushes that he’s used to, and most of the steel for his sculptures actually comes from old cars, a few of which are sitting in his backyard.

Radoff still isn’t done with building, though. I got a chance to see the last motorcycle he says he’ll ever build. It’s a completely custom fabricated and painted chopper, still sitting in his garage, and he’s not quite sure what he’ll do with it. For more on that, and for Radoff’s advice to the upcoming generation of custom builders, watch for the next issue of Bodyworx Professional magazine!