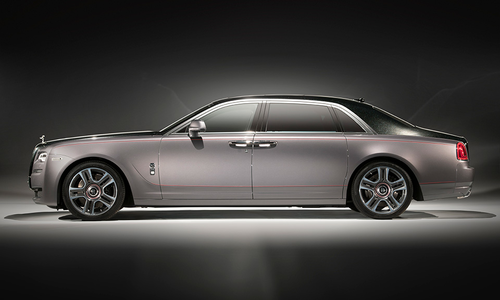 If you thought paint was expensive before, just wait until you see the price on the new Rolls-Royce Ghost Elegance. The Ghost, which regularly starts at just under $400,000, is about to get quite a price hike, thanks to a new paint job announced by the company. The Ghost is a car that even under normal conditions could only be described as “pure luxury,” featuring a twin-turbocharged 6.6 litre v12, a butter-smooth 8-speed transmission, and over 560 horsepower, the Ghost is already guaranteed to turn heads wherever it goes, but the “WOW” factor of the car, and it’s price tag, are about to jump exponentially with the reveal of the Rolls-Royce Ghost Elegance.

What makes the Rolls-Royce Ghost Elegance so impressive? The paint job, made with over 1,000 crushed diamonds. A media release from the company says that the Ghost is already near-perfect, stating each Ghost is “hand-built by more than 60 pairs of hands. The precision and patience our craftspeople put into Ghost make it a masterpiece in its own right. From the five coats of paint on the body to the hand-stitched leatherwork inside, perfection is the benchmark. Anything less just won’t do.” They hope to ramp this up further with the Elegance, stating that the paint job alone is “the most luxurious and lustrous exterior ever seen on a motor car.”

Rolls-Royce states that this will be the most expensive paint option ever put on any of their cars, though they haven’t released any pricing details as of yet, nor have they shown any of the other features beside the paint job of the Elegance.

Previously, the world’s most expensive paint job was probably found on the Cadillac CTS-V’s Black Diamond edition. That car featured a layer of SpectraFlair pigment sandwiched between a metallic black base coat and the clear on top. Inside the SpectraFlair pigmentation, aluminum flakes encased in magnesium-fluoride, diffract light in a way similar to a diamond. Cadillac paired with JDSU to develop the paint scheme. Encased aluminum, impressive though it may be, just doesn’t cut it when compared to actual diamonds.

Bentley also offers some impressive paint options. A matte-coat of paint on the brands flagship Mulsanne costs about as much as a loaded Toyota Camry, around $35,000. If even one speck of the paint isn’t perfect, the entire panel has to be repainted. Talk about dedication!

What do you think of the opulent new paint job? Too much? Or just enough to match the company’s reputation? Let us know in the comments section below!