DRK Restorations brings classics back to life in Manitoba 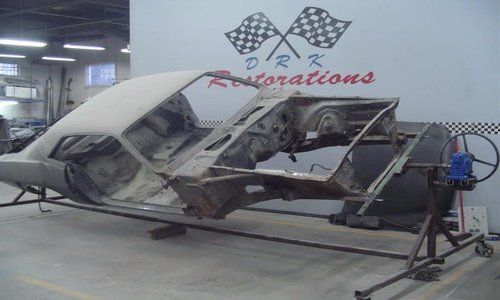 Delmar Kanton is the owner of DRK Restorations, an independent restoration shop in Dauphin, Manitoba. The shop is coming up to 15 years in business. It’s quite a benchmark. According to recent reports by the Small Business Association (SBA), most newly-founded companies fail to take off in just their first year. A third of the businesses that do make it to their first birthday shut their doors before the five year mark.

Kanton says that his dedication to the job is one of the many things that keep bringing him customers from all around the country. For one job, on a rare 1960s Chevy, he cut a vehicle completely in half in order to remove all of the rust.

“This car was completely cut in half and mounted on a jig for all the rust repairs,” says Kanton. “I had to block sand it five times and when it was done, it was finished with a beautiful glossy black paint job.”

The cars that Kanton works on aren’t easy to find parts for. OEM parts are almost impossible to find new, and even used body panels can be a hassle to source. This leads Kanton to hand-fabricating a lot of the parts he needs.

“I do a very large percentage of the body-panels by hand,” says Kanton. “For example, a 1969 Imperial we did recently needed a completely hand-fabricated lower quarter panel. You just can’t find OEM parts for cars like these.”

Kanton’s wife, Shannon, also gets in on the restorations, helping him with the painting process and body-panel smoothness. “She’s the best at knowing if a finish is well done or not,” says Kanton. “She can look at a car for all of a minute and tell you exactly where any impurity or imperfection in the paint is. I’m glad to have her help!”

Kanton has over 30 years of experience in automotive restoration and collision repair, and in that time he’s earned quite a bit of recognition for his fantastic work. He’s been profiled by Collision Repair magazine before, and has had a feature in Canadian Hot Rods magazine. He’s won the Canadian Bodywork and Refinish award from Bodyshop (now absorbed by Collision Repair), and was even featured on a live TSN broadcast, where a 1970 Mach 1 mustang and 1970 Dodge Challenger were used in the opening for the program.

For others who hope to follow a similar path, Kanton has some advice. “You have to make sure you have a passion for it,” he says, “If you don’t have a passion, you won’t get very far. But if you do have a passion? It will be the greatest, most satisfying job in the world for you.”