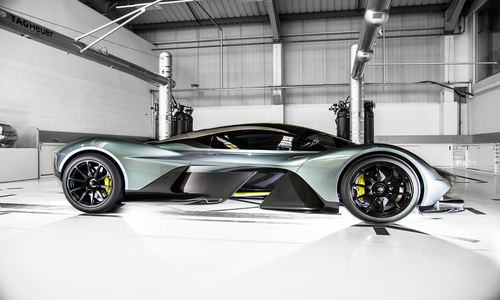 The Toronto-based Canadian International Auto Show (CIAS) will host the Canadian reveal of 41 new vehicles. Rinspeed, a think tank working on carbon neutral and ecologically viable vehicles, will reveal its “Oasis”, a car so committed to preserving ecosystems that it’s going to have one, in the form of a small garden, on the dash of the vehicle. Perhaps body techs will need horticulture training in the future?

CIAS will also showcase the global reveal of the Aston Martin AM-RB 001 hypercar. The AM-RB 001 is set to feature 1000BHP per ton, a ludicrous amount of power. Few specs have been revealed other than that. Perhaps the comapny is waiting until CIAS before revealing the final power figures and 0 to 100 km time.

One thing that is particularly interesting, though, is the body and chassis design. Like the Lamborghini Aventador, the AM-RB 001 will feature parts borrowed from F1 vehicle design, including mostly carbon fibre body components, and a completely carbon fibre frame: virtually unheard of in the world of road cars.

That’s another important fact: the AM-RB 001 is set to be a completely road-legal production vehicle. Though it will certainly feature a limited run, it’s not as if the British hypercar will be track only. Aston Martin will, however, offer a track-oriented variant, with less in the way of seating and higher horsepower. Both models will also feature featherlight rims, attached by a single locking mechanism at the centre of the tire, much like an F1 or NASCAR circuit car.

Most of the cars “debuting” at CIAS have been seen somewhere before. The majority of those 41 cars have been shown off at car shows in Japan, Europe or elsewhere. However, in addition to the latest from Aston Martin, CIAS will host the global reveal of a vehicle you’re more likely to see come into the shop over the next year or two: the 2018 Hyundai Accent.

“We are excited to have Hyundai use Toronto as the platform to release the newest version of the Accent to the world,” said Jason Campbell, General Manager of the AutoShow in a press release. “As a global-minded city and the fourth-largest consumer market in North America, we believe we offer a great launch pad to an internationally connected audience.”

The new car features the usual cascading grille, a visual signature that is integral to Hyundai Motor’s identity. It also hints at a slim and modern rear bumper, a sweeping roofline, and a sharp character line running the length of the car. You can check out a teaser video in the player below.

PrevPreviousMillennials and the bodyshop: Why the rebirth of DIY culture means more future techs
NextLiving Legend: Inside the world of Yosemite Sam RadoffNext