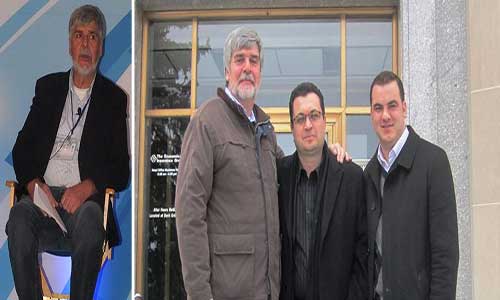 A mountain may have just one peak, but several routes to the top. When it comes to collision repair and the broader auto claims economy, it’s more like a mountain range. There are numerous peaks, and even more numerous paths to the summits.

Throughout the collision repair and insurance industries, you will find many executives who started out wearing coveralls and holding a dolly, rather than a suit and tie, holding a briefcase. They started their careers on the shop floor and ended up in the stratosphere.

Keith Hudd started his career as a mechanic, before switching to the collision repair industry. His formal career recently came to an end with his retirement, but he didn’t retire as a body tech. Instead, Hudd followed a path that led to the insurance industry. Specifically, he was the National Manager, Physical Damage Vendor Programs in Economical’s claims department before retiring, a position of considerable influence within the Canadian auto repair industry.

A well-known figure in the industry in the years leading up to his retirement, Hudd was frequently requested as a speaker at industry events and conferences. The collision repair and the insurance industries are inextricably linked, but very few people cross the boundary from one to the other. Hudd did cross that boundary, and it provided him with a perspective that was much in demand.

“Understanding the full scope of what both sides are trying to achieve is important,” says Hudd. “Insurers and repairers both want vehicles repaired safely and cost-effectively. Having worked both sides, I can sometimes see where repairers and insurers are crossing their wire when they should be collaborating.” It’s this sense of collaboration that best exemplifies Hudd’s career. For example, working together with AkzoNobel, Hudd and his team at Economical Insurance developed an assessment program for the collision repair facilities on the company’s direct repair partner (DRP) network. Rather than simply looking at key performance indicators, the assessment examined exactly where each individual facility is on its journey to leaner and more efficient processes, and then gave concrete suggestions for how they could improve. It wasn’t entirely for the facility’s benefit, of course, as Economical could use the same information to make predictions about the DRP network.

“The assessments were a necessity, as it helped to indicate which collision repair facilities stood the best chance of surviving well in the future,” he says. The program was a success, leading AkzoNobel to invite Hudd to sit as a panelist on one of the company’s Sustainability Leadership Symposium events, designed to discuss methods to ensure the future viability of the collision repair industry. “They wanted the Canadian perspective, because we’ve found success with including vendors in our processes,” says Hudd. “We understand that lean is really continuous process improvement, and it takes investment. We need to know they’re doing it, and the shops that are making that investment will be rewarded.”

It’s an understatement to say that Keith Hudd has had a profound influence on the collision repair business in Canada. The people he’s worked with over the years have often gone to long careers in the industry themselves, sometimes with profound effects.

Bill Speed is a figure familiar to anyone who follows Skills competitions, whether local, provincial, national or even World Skills. An instructor at Danforth Collegiate and Technical Institute in Toronto, Speed is also a regular volunteer and organizer at Skills events, and has had an incalculable effect on the industry as a whole. Quite a few of today’s top techs and managers got their start thanks to encouragement and training from Speed. He worked under Keith Hudd in the early days of his career, right after he finished his apprenticeship. “He was managing Vaughan’s Collision at the time, and you could tell pretty quickly that he was headed for big things,” says Speed. “He was very good at spotting talent and encouraging the best. Once he was on the appraisal side his estimates were always fair. I think it’s absolutely the case that his experience as a body tech influenced this.”

Hudd left Ban’s Collision to work for Crawford & Company, an appraisal management service. Later, he worked as an independent appraiser, before joining Economical Insurance. “Someone studying to be a tech today needs to understand the full scope of what they’re doing,” says Hudd. He’s not just referring to the technical side of vehicle repair. “Repairing the vehicle is a given. You have to repair it to satisfaction. You really need to think about what other value-added services you can offer the vehicle owner or contribute to the claims repair process to distinguish yourself from your competitors.”

Others have spoken about the creative problem solving skills that a good technician must develop, and just how portable those skills are. Every employer, in every field, can use creative problem solvers who know technology. However, there are other skills, or at least other mindsets, that can seriously increase your value.

“You need to look at and understand the full scope of what you’re doing,” says Hudd. “A lot of technicians have a tendency to see things in black and white: it’s repaired or it isn’t. That’s true enough, but most situations aren’t quite as clear cut. Seeing the full scope of the repair means looking at the process and everyone it affects. That’s the motorist, the techs and production staff, the facility owner and the insurer. They all have skin in the game.”

Transitioning from the life of a working technician to that of an estimator or an appraiser is not always easy. There are new challenges, especially in terms of acquiring knowledge. Hudd believes the process could be much simpler. “You can take young techs and teach them how to estimate, but then they’re usually thrown into the front office where the first thing they see are 18 different manuals for how to prepare estimates for different insurers,” says Hudd. “In an ideal world, there would be just one manual sitting over that desk.”

Hudd notes that more cooperation between insurers could help the industry towards a day when only one manual is needed. After all, insurers are generally looking for the same thing: vehicles safely repaired, quickly and at an efficient cost. “It can be frustrating when we’re trying to get consensus,” says Hudd. “People talk about protecting competitive advantage, but I think that’s a load of crap, frankly. There’s only competitive advantage, really: if I can get the car fixed first, I win. If I get it totaled first, I win. Anything that lets you make those decisions quicker, without sacrificing accuracy unnecessarily, is the real competitive advantage.