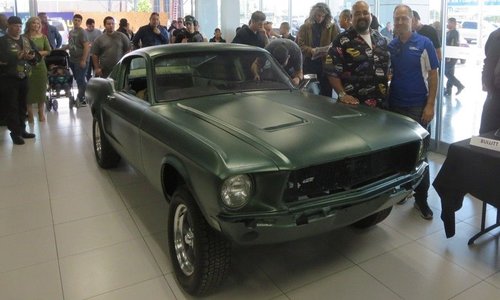 This one will certainly be an interesting challenge for whatever tech gets their hands on it – the second of two 1968 Ford Mustangs used in Steve McQueen’s famous “Bullitt” has been found, rotting away in a Mexican junkyard by a man named Hugo Sanchez, who promptly purchased the car, thinking it to be a good candidate for modification and custom body work, without knowing the significance of the car thanks to a new paintjob. First generation Mustangs, while rare up here in the icy and salty north, are still quite common in other areas, but what sets this ‘Stang apart is it’s unique custom body, upgraded suspension, custom paint … oh, and the seven-figure value.

Chavez didn’t originally recognize the car as a Bullitt Mustang, thanks to its many layers of paint overtop the original dark green that graced screens in ’68, an indication that more than just Chavez had gone through this car without knowing its true value and cultural significance. One of only two Mustangs made for the cult- and box-office hit, the newly-found Bullitt will be sure to fetch massive money should the new owner choose to sell it. Though the other car has changed hands many times, the current owner hasn’t had it shown to the public, and no records seemingly exist of any sales prices – adding even more exclusivity to the find for Chavez.

Other similarly famous sports-cars, such as the original Aston Martin driven by Sean Connery as James Bond, have fetched up to $7 million at auctions such as Barrett Jackson’s. The stark difference being that there were quite a few Aston Martin’s made and used in the James Bond films, and only two ever originally-used Bullitt Mustangs.

The car is absolutely authentic, too, according to Kevin Marti, a Ford-vehicle expert and the man behind the famous “Marti Reports”, which can tell you anything about any Ford vehicle produced from 1967-2012, provided you have its VIN. “I’m 100 percent sure it’s authentic,” said Marti to Fox News, regarding the car. Marti would know, too, as he fabricates reproduction and tribute VIN plates for vintage Fords, so if anyone would be able to catch a fake, it would be him.

The original plan for the Mustang was to turn it into a clone of ‘Eleanor’, from Gone in 60 Seconds, but when Chavez’s friend, a body work technician and custom car builder named Ralph Garcia Jr. sent the Mustang’s VIN number in for a Marti report, the results were shocking. It’s one of two consecutive-serial-number cars used in the film, and the other hasn’t appeared in public for decades. The two plan on restoring it to its original state as faithfully as possible, using only deadstock OEM parts.

PrevPreviousMotorama ’17 to raise money, awareness for Prostate Cancer with the Prostate Cancer Canada Network
NextRags to Ragtop: This Fat Fender ’35 Ford has never looked better than at Motorama 2017Next