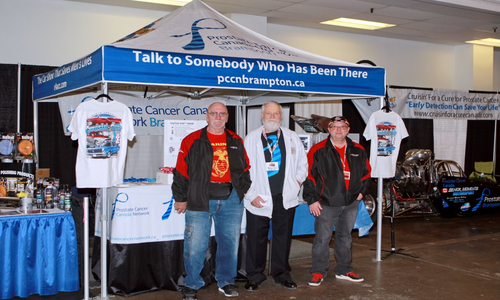 According to a media release by Motorama, Prostate Cancer Canada will have a booth set up at the show, staffed by members of Prostate Cancer Canada, as well as members of the Prostate Cancer Canada Network, most of whom are prostate cancer survivors themselves. They’ll be there not only to give information about the most common type of cancer in men, but also to advertise for their Cruisin’ For A Cure Canada” Campaign, which not only inspires automotive enthusiasts to get involved in the fight for a cure, but also hands out free prostate-specific antigen tests, which are instrumental in early prostate cancer detection.

PCCN spokesman Jim Dorsey, per Motoramashow.com, says that prostate cancer doesn’t have to be a death sentence, and that the free PSA testing can be an instrumental step in early detection. “The key to surviving prostate cancer is early detection, when the survival rate can be over 90 per cent. The PSA test is the best method we current have to alert men to a problem at an early stage,” Says Dorsey, “That’s the message that we’re trying to get across at Motorama.”

Though the mortality rates of prostate cancer have decreased dramatically over the last few decades, over 4000 men in Canada still lose their lives to prostate cancer each year. PCC and PCCN hope to change this, and one of the best ways they can do this is to open a dialogue about self-care, going to doctors, and getting tested if you’re a man over 40.

The intersection of health-mindedness and automotive enthusiasm can be a great stepping stone for many people to talk about a usually uncomfortable topic, which is why it’s so impressive that Motorama is using their reach to help promote Prostate Cancer Canada and their associated charities.

Keep a close watch for more content from Motorama over the coming days as we cover news regarding the show and the show itself this upcoming weekend!