Rags to Ragtop: This Fat Fender ’35 Ford has never looked better than at Motorama 2017 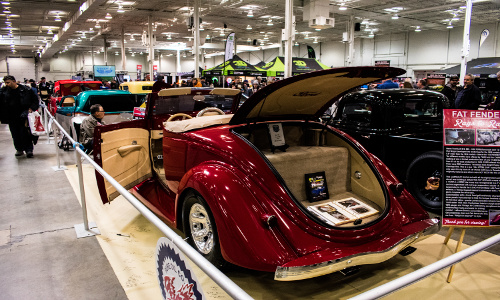 Ken Bowler is passionate about bodywork, and it shows. Bowler’s restored Ford convertible turned quite a few heads at the recent Motorama show with its large fenders and aggressive styling.

Bowler has been working on the project for quite some time. It’s really been a labour of love from the start. That’s part of why he was willing to show off the the 1935 Ford convertible, nicknamed the “Fat Fender ’35” at this year’s Motorama car show in Toronto, despite the long drive from his Parry Sound home.

“The cabriolet which you are looking at was a limited production item of only 17,000 deluxe models produced, less than 3 percent of the total production in 1935,” said Bowler during an interview with Bodyworx Professional at Motorama. “In the past 30 years I have only seen six in my tours of car shows both here in Canada and the USA.”

Bowler poured a ton of energy and time into the build. “It took me 16 years to build, overall,” he says, citing the custom fabrication and extensive bodywork he had to do to get the car to show quality levels.

When Bowler first purchased the car, it had been through the wringer, to put it mildly. Sitting for ages, plenty of dents and dings, and it needed a bit more work than just buffing out the rough patches.

“This is a rare all-steel car,” says Bowler. “It started out with all its original steel parts, including the frame, but since I was building a smoothie hot rod with a more modern power plant, the frame was re-engineered into a 2 X 4 boxed frame with tubular centres, augmented with coilover suspension, tubular A arms, and 4 link real bar suspension to handle the 5.0 HO FI Ford Motor with Ford headers and 2.5-inch stainless exhaust.”

In addition to the customization, Bowler had to do quite a bit of fabrication to match original specs. This is quite the feat, considering the fact that there simply aren’t many other examples of the vehicle to go off of.

“All new door skins, quarter panels, and deck lid were hand fabricated to replace all of the moth-eaten 1935 steel,” says Bowler, attesting to just how much had to be done on the beautiful Fat Fender 35 to get it to where it is now. Pictures say more than words ever could, so make sure to check out the gallery below!