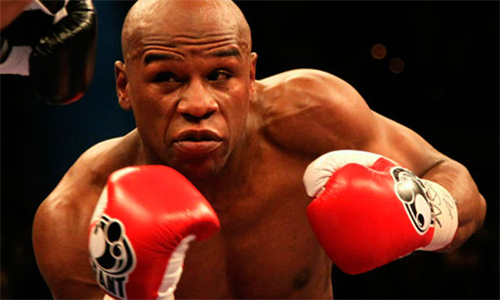 Floyd Mayweather, famed undefeated boxer and quintuple champion, will make an appearance at the Barett Jackson automotive auction for the purpose of selling his Bugatti Veyron Grand Sport. The Bugatti Veyron is one of the fastest cars in the world, and the Grand Sport’s slightly quicker brother, the Super Sport, holds the Guinness World Record as being the fastest production car in the world. The Bugatti Grand Sport was limited to a production run of only 150, making Floyd Mayweather’s Bugatti an even more desirable variant of an already ridiculously desirable car. The Bugatti Veyron debuted with an MSRP of $1.4 million USD, however, since then the price has shot up, with the prices at auction rocketing to as high as $1.8 million USD. Floyd Mayweather will be amongst other celebrities trying to sell their own automobiles, like Justin Bieber, who is trying to sell his 2011 Ferrari 458 Italia F1 Edition.

Also gracing the auction floor will be superstar singer/songwriter Steven Tyler of Aerosmith, and the most decorated Olympian of all time, US Swimmer Michael Phelps. Phelps and Tyler are attending for a different reason than selling their own personal automobiles, however. The two will both be on site for the purpose of promoting charities and automotive auctions with the proceeds going to charity, instead of being there just to sell their own automobiles like Bieber.

Craig Jackson, current CEO and Chairman of Barrett-Jackson, says that the auction is a unique opportunity for both pop-culture fans and automotive enthusiasts alike. “Barrett-Jackson attracts the best collector cars, as well as the world’s hottest celebrities,” says Jackson, adding “This year is certainly no exception. Music legend Steven Tyler, Olympic superstar, Michael Phelps and Ford Motor Company’s CEO, Mark Fields, all joined us tonight to help some incredibly deserving charities. Tomorrow we’re excited to host pro championship boxer Floyd Mayweather as our special guest, as well as international music icon, Justin Bieber. No other collector car auction gives you the chance to see supercars and mega stars under the same roof.”

Unfortunately, Barett’s Bodyworx Blog has no correlation to Barrett-Jackson automotive auctions. Though the author sometimes wishes he was associated with the company, he is not in any way related to it, other than having a somewhat similar name to one of its founders.

For more information on the auction, head to http://www.barrett-jackson.com/

UPDATE: January 23, 2017, 4:25PM. Reports indicate that Floyd Mayweather’s Bugatti did not meet reserve, and therefore did not sell at the auction, meaning if you’d like it for yourself, you’ve still got a chance!