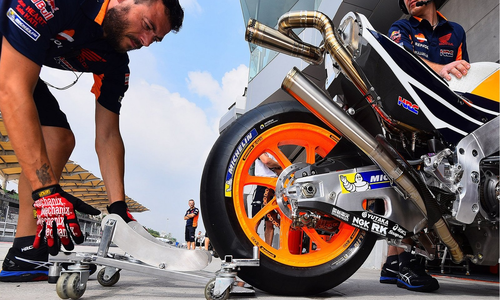 If you’ve seen the photo circulating about showcasing Honda’s MotoGP Repsol motorcycle and its fantastically welded exhaust, you might find yourself asking “just what is the point of that?” or perhaps, “I wonder why they did that” or even “Why does one of the exhaust pipes look like it came out of a Max Ernst painting?”

The answer to the question has a few different answers, but the easiest way to put it would be thus; you need to have an equalised backpressure on the cylinders of your engine. Two of the four exhaust ports are closer to the rear of the bike: a ramification of the advanced V4 that powers the Honda super moto, which means in order to equalise backpressure, the Honda engineers had to do some tricky welding to make the two pipes the same length, while not sticking out too far, hence the strange and beautiful twisty welding of the exhausts. Since the exhaust system isn’t a 4-into-1, but rather two separate 2-into-1 systems, the backpressure would be different to each set of cylinders if the pipes weren’t the same length.

The reason for the tricky welds might have been technical and engineering-oriented, but the result is certainly beautiful. The expertly welded exhaust, a testament to the engineering and skill of the Honda Race Team engineers, will likely be scrapped soon, only to be replaced with another: a common and frequent consequence of using such lightweight materials. Honda’s Repsol motos make use of ultralight exhaust components which are all custom-made per bike, in order to save weight, and to tailor to the personal preferences of each of their team-members.

The Yamaha Movistar Team, by contrast, uses a more standard – if less stylish – exhaust. Making use of a 1000cc inline 4 in their 240+ horsepower YZR-M1, the Yamaha team uses a standard 1-exit exhaust system with an Akropovic slip-on style exhaust pipe; saving weight with a number of carbon fibre body materials rather than lightweight, though disposable, exhaust systems.

According to fcaemea.com, the Movistar bike features carbon fibre components on its “the front fairing, the front bumper and the seat cover.” In order to save weight, alongside the aforementioned ultralight exhaust. Ducati-Marlboro, however, beat them to the punch, and has been using carbon fibre frames since the mid-2000s, adding in even a carbon fibre swing arm in 2009. The swingarm alone cut seconds off of his lap performance in Qatar after its introduction, and that was before refinement.

Carbon Fibre, which splits and shaters in crashes, is far more difficult to repair than traditional materials, and oftentimes just needs to be outright replaced. While this isn’t so much a problem for motoGP teams who have lots of money to throw around, it can be more problematic for people purchasing motorcycles with Carbon-Fibre accents