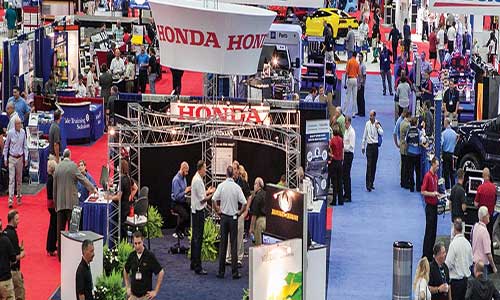 The International Autobody Congress & Exposition (NACE) brings the best in equipment each year, offering attendees a chance to get up close and personal with a variety of new and exciting products on display on the tradeshow floor. We’ve rounded up some of the latest and greatest products and tools for techs featured at this year’s event.

One such standout was Luma III’s LED-equipped spray gun attachment. The first of its kind, the Aurora consists of a carbon fibre composite mechanism that fits behind the nozzle of a spray gun, featuring two LED lights on each side for enhanced illumination. The nozzle also produces a faint shadow to help paint techs line up the shadow mark at the bottom of the previous pass to achieve a 50 percent overlap. Operating at 4600 Kelvin—the rough equivalent of rays from the midday sun hitting Earth—the LED light allows for colour matching during the painting process, rather than after. The company says the product will save shops time and money by simplifying the process and decreasing room for error. “You can see the atomization, you can see your pattern a whole lot better … light is right there in front of you,”  says owner and CEO of Luma III, Kirk Lucas, who demoed the device live on the NACE floor. “You see what your paint job looks like naturally in the sun.”

EMM continued the theme of innovation with the European supplier’s North American debut of a high-end, redesigned modern paint suit, the Colad Bodyguard. “No one has updated or innovated this in 20 years,” says Thomas van der Kooij, EMM Managing Director. “We think this is a product that is revolutionary.”

On the NACE show floor, van der Kooij pointed out the model’s features. The back of the Colad Bodyguard incorporates advanced, breathable mesh and ventilated fabrics to keep the painter cool. The suit also eliminates the cord that tightens the head around the face, opting for a simple zipper mechanism, making it easier to get on and off. The fit has also been re-designed to allow for mobility, and features soft cuffs for added comfort. EMM’s other offerings included Colad Color coding rings, a patented colour system for pump style spray containers, and the TurboMix, a new plastic paint stirrer constructed from recycled materials.

Chief Automotive Technologies also made their presence known during this year’s installment, offering up training demos using the company’s latest aluminum joining equipment. Aiming to help the industry stay ahead of the game and make the transition to working with aluminum, the company has introduced a new rivet gun, the PNP90, into the North American market. “We brought out a new welder. But we also wanted to bring out the rivet gun,” a Chief spokesperson told Bodyworx Professional magazine on the convention floor. “We find a lot of places are saying, ‘If we’re going to update the welder, let’s update all of it at once.’” The new rivet gun was designed to be compatible with various shapes and sizes of rivets offered by OEMs.

Adding to the exhibition’s live demos, reps from Wedge Clamp Systems were also on hand to showcase the company’s new product, a re-designed Stat Gun. The upgrade aims to neutralize static and prevent build-up—which can attract dust, dirt and other airborne impurities, resulting in inconsistent, splotchy paint jobs.

Plastic areas in particular cause issues as the material tends to hold more static. “People don’t understand that static electricity on the surface can affect the quality of the paint job. If there are areas that are charged in different ways this can affect the paint application,” says Claire Cleland, Sales Manager for Static Solutions, manufacturer of the gun. “Static control gives you a constant, natural paint job.” Neutralizing static electricity can also make metallic flakes in paint stand up on end. This is key for high-end metallic paint jobs. Another benefi t, Cleland adds, is that by painting evenly, less paint is used. Shop owners have the option to buy or rent Wedge Clamp’s Stat Gun, but either way, Cleland says it’s designed to last.

With event organizers already looking ahead to next year, there’s bound to be an onslaught of great gear coming down the line. The 2016 installment is slated for August 9 – 13, taking place at the Anaheim Convention Center in Anaheim, California. 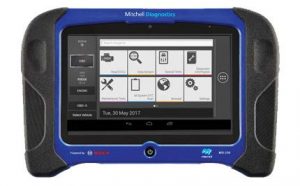 According to Mitchell, its Diagnostics system is designed to break the repair process down into a three-step system. First, users