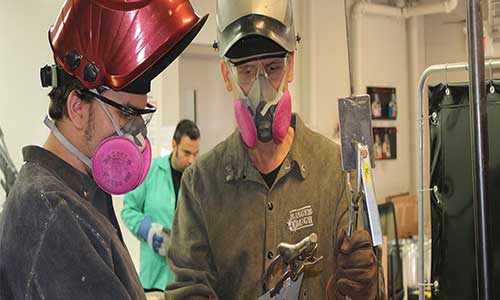 Justin Dambitis on his journey to represent Canada.

In August, the beautiful city of Sao Paulo, Brazil, played host to WorldSkills 2015. The event is the largest and most decorated trade competition in the world. In total, 1230 competitors, including 29 Canadians, representing 60 countries battled in 50 skills over six sectors at the 43rd WorldSkills competition. One of them was the Auto Body Repair competition, featuring 20 competitors including Canada’s own Justin Dambitis. Dambitis’ road to success holds a twist as he started out wanting to become a mechanic, but fate had another plan for him. He tried an auto body repair class and “I have been loving it ever since,” says Dambitis.

Dambitis took it upon himself to become the best technician he could and did not shy away from working some overtime while attending high school. “I did all the auto body classes I could while attending grade 12, and that year I was introduced to the RAP,” says Dambitis. RAP, or Registered Apprenticeship Program, is a modified apprenticeship program allowing a high school student to become an apprentice while still in school.

RAP gave Dambitis the opportunity he wanted, a job interview at a collision repair facility. “I was hired and started working every day after lunch for five months until school was done, and began working full-time,” says Dambitis. He has been working at that shop for just under four and a half years.

As a result, he is well beyond the apprenticeship stage, much earlier in his career than many others. “At the age of 21, I have four journeyman tickets with two interprovincial red seals,” says Dambitis. Early in 2013, Skills Alberta contacted him and invited him to compete at the provincial level. Dambitis agreed to participate in the competition, where he finished second. That day, he promised himself he would come back.

A year later, Justin participated in the provincial skills competition again. The result was another medal but this time around, the medal was gold. That first place finish earned him a chance to compete at the 20th Skills Canada National Competition held in Toronto. At the Skills Canada National Competition, Dambitis found himself competing against six other post-secondary students. Once again, he gave the competition everything he had, and once again he won gold. This medal meant he had earned himself a trial spot for Team Canada.

In his training for WorldSkills 2015 Dambitis traveled through Canada and around the world. He went to Ottawa, Saskatoon, Montreal, Montebello, an even to New Zealand to participate in the, WorldSkills Oceania tournament, where he finished as runner-up. “I’ve also been to Toronto for 14 days as part of the SCNC and training with Daniel Chudy,” says Dambitis. Chudy is a Team Canada Expert for WorldSkills 2015 and an auto body repair instructor at the School of Transportation at Centennial College. His job for the tournament is to deal with both the logistics and giving insight into Justin’s work.

“My expert informs me of things to look for and what the judges will be marking me on,” says Dambitis. Chudy has helped Dambitis with his spot weld drill marking the under layer of metal when the drilling panels come off, his finishing work with metal when using a vixon file, and what to look for in the finish and the outlook of the repair.

Dambitis trained daily for WorldSkills. Every day at work he utilizes the theories his trainer, Derek Topolnisky, has taught him. On top of that, he spentime at SAIT’s facilities on the weekend to master his craft. “We mostly train at SAIT but we had a chance to train with the 2005 past world competitor Mark Millson at Excellence Auto Repair in Toronto for a week,” says Topolnisky. It was just one week, but Dambitis knew Millson’s insights could prove invaluable.

His shop is equipped with six bays, two paint booths, a floor pulling system and a frame machine. The facilities at SAIT include three big paint booths, four prep stalls, five frame machines and three floor pulling systems. Throughout his time in the shop, Dambitis has worked on heavy collision repairs, which exposed him more to pulling frames, estimating the best ways to pull a vehicle and assess heavy body damage. “I have always loved welding,” says Dambitis, which fits his work. Over time, Dambitis has developed affection for heavy collision repair and is mastering his passion for welding, all at once.

Looking back at his career so far, “I think the hardest challenge I faced was being a young man entering the industry,” says Dambitis. He added that when you are young “you are not given the same chance to show yourself.” However, when he did get his chance, he made the most of it. And, as far as the WorldSkills 2015 competition goes, Justin Dambitis was not worried. He worries about the only thing he can control, which is having fun while competing. “I expect myself to give it my all in competition and work as hard as I could ever work while still being a team player and be as friendly as possible to my competitors,” said Dambitis ahead of the event. All of the competitors were very closely ranked at the end of the competition, with numerous ties. Dambitis placed tenth overall.

PrevPreviousDistilled experience: an examination of the careful teamwork necessary for any custom car build
NextNew at NACENext