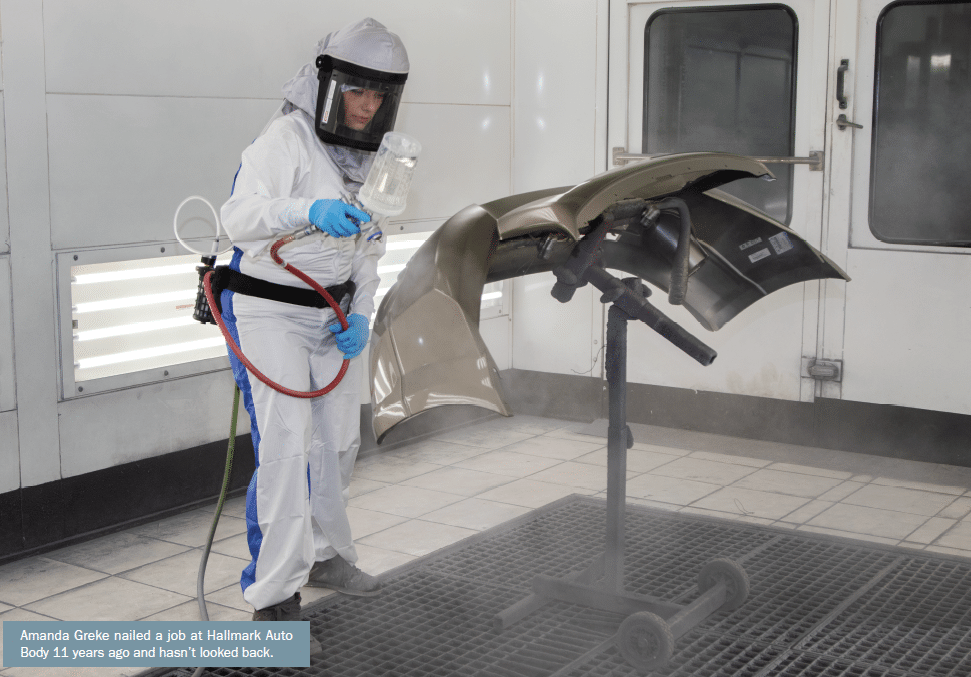 Amanda Greke has never been one to back down from adversity. Like many women in maledominated professions, Amanda’s journey to becoming an automotive painter didn’t come without its bumps in the road. “When I first started my career it was a bit of a challenge to gain respect for my work and move past the fact I was a female wanting to be in this trade. I felt there was a bit more pressure to show I was capable of doing this work and doing it well,” said Amanda.

Pressure or not, Amanda was determined to become an automotive painter. Not only was the automotive industry her passion, it was in her blood.

Growing up in Linden, Alta. Amanda spent countless hours watching her father, a Red Seal-licensed autobody technician, perfect his craft. The shop was a second home to Amanda and, more important a place that taught her the importance of hard work and dedication.

“It was such a big part of my life growing up and something I’m really grateful for,” said Amanda. 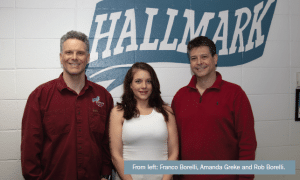 It was during this time with her father that Amanda saw her future flash before her eyes. “I always had a talent for art and loved being creative,” Amanda said. “I remember hand-painting a Pink Floyd album cover in high school art class, which really exemplified my creativity at a young age. I saw automotive painting as a way for me to combine my passion of being creative with my love of autobody.”

Amanda’s start in the industry came when her sister helped her get a job at a local bodyshop. Wasting no time, Amanda quickly picked the brain of the shop’s painter, trying to learn as much as she could about the trade. Fortunately for Amanda, her colleague offered far more than just some tips on how to paint a car.

“He told me about his previous workplace and how he thought it would be a great environment for me to start an apprenticeship,” said Amanda. “He ended up getting me an interview and, not long after, I was starting as an apprentice.”

In March of 2008 at the age of 21, Amanda began her apprenticeship at Hallmark Auto Body in Calgary. Realizing the opportunity in front of her, Amanda wasted little time making an impression on the shop’s owners, Joe, Franco and Rob Borrelli.

“Amanda’s pride and dedication in producing quality work was very evident from the start,” said Franco Borrelli. “She had very little experience when she started; however, her willingness to learn and apply her talents is what sets her apart from many other apprentices we’ve dealt with in the past.” After learning how to properly prep and paint a vehicle, Amanda was brought on as a full-time painter at Hallmark. Despite her lack of particular experience, Amanda more than made up for it with her willingness to succeed — a character trait she’d developed years ago working with her father. 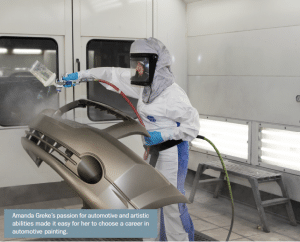 “Amanda has always been eager to learn, committing herself to doing her duties properly,” said Borrelli. “Her willingness to learn and careful attention to detail have been big parts of her success as a painter.” With the confidence of an established owner and bodyshop behind her, Amanda pursued her Red Seal certification, becoming a licensed automotive refinisher in 2013.

“I would definitely have to say that getting my Red Seal ticket was my proudest accomplishment in my career,” said Amanda. “There was a great sense of accomplishment and a big smile on my face when that certificate came in the mail. It was after this achievement when Amanda’s talents really began to flourish. Being given the flexibility to experiment with colours, Amanda was finally able to put her skills to the test, an opportunity she’d been looking forward to her entire life.

“Being able to be creative and artistic every day for work is really a dream come true,” said Amanda. “There’s nothing quite like looking at a smooth, shiny fresh clear-coat.” Just recently Amanda painted a fully restored 1965 Shelby Cobra with a racing stripe. “This Shelby Cobra was one of the best paint jobs to ever be performed at Hallmark Auto Body, and that’s saying a lot; Amanda has worked with some very talented painters here during her career,” said Franco. “She takes great pride in her work, and her color tinting and matching is her greatest strength. Today’s colours are extremely difficult to deal with, yet Amanda remains confident and patient when dealing with those issues.” It’s been 11 years since Amanda first walked through the doors at Hallmark Autobody. Despite her responsibilities having changed, Amanda’s passion for the industry remains the same. The once inexperienced apprentice now finds herself in a leadership role, a position she worked so hard to achieve.

“Amanda likes to share her past experiences with our current apprentices. She really embraces taking on a leadership role and is the perfect example of someone who committed herself to excelling in this trade,” said Franco. Not only has Amanda developed as a role model inside the shop, but she also is one outside it too. Now the mother of three young boys, Amanda works hard at balancing a busy life with her responsibilities in the workplace. “Being able to raise three children and still work in a field I’m passionate about is really a dream come true,” said Amanda. “It’s definitely not easy and sometimes it feels like there aren’t enough hours in the day, but I’m able to make it work and wouldn’t trade it for anything.” 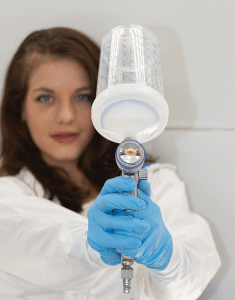 Amanda’s willingness to go above and beyond to do the things she’s passionate about has been a quality the young tradeswoman has carried with her since she was a young child. It is this very attribute that Amanda hopes to inspire in her children. Lucky for Amanda, she has a good idea of where to start.

“My oldest boy helps me do oil changes and already says he wants to work with me when he grows up,” said Amanda. “Looks like I’ve got my work cut out for me.”