Printing Power: Additive manufacturing may be the future of the auto repair industry 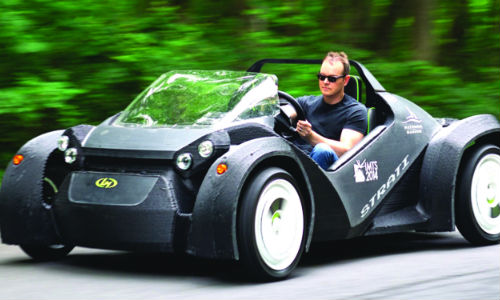 Peterborough, Ontario — July 27, 2017 — Imagine this scenario: a car rolls into the shop with a seemingly simple problem, such as a single broken bracket on a wiring harness. Laying hands on this bracket, however, proves to be very difficult. It turns out it is only available as a part of an entire assembly, turning a simple fix into a costly problem. But what if you could just print out a new one?

It’s not a science fiction story. Nor is it hypothetical. This is a completely real account of a shop that faced this particular challenge, and solved it with 3-D printing. Aeromotive, a company specializing in electrical connectors and wiring harnesses, helped the shop by 3-D printing the bracket and sending it their way. In a video describing the innovative solution, Aeromotive CEO Carl Dumele said, “We 3-D printed a bracket, sent it back to the collision centre and had it turned around in eight hours. One day. Cost? $150.” This is just one of the potential benefits for 3-D printing, or additive manufacturing as it’s formally known.

Christopher Tomko is the Chief Operating Officer for Freshmade 3D, a company specializing in additive manufacturing. He notes that a lot of time can be saved by using services like those offered by his company, especially when it comes to rare and hard-to-find parts.

“People are used to spending months or years going through warehouses trying to find a part,” he said. “Here we’re using digital manufacturing to make that part in just a couple of weeks.”

These timelines are becoming even shorter as the technology develops. The automotive industry is always moving forward with new technology, and a growing number of companies are getting involved with additive manufacturing.

Plastic is usually seen as the primary material for 3-D printing, but advancements are allowing for other materials to be used, including metals. Additive manufacturing is not at the stage where it can compete with traditional manufacturing methods when it comes to mass production. However, it’s rapidly becoming the preferred solution for one-offs and small production runs.

Local Motors is possibly the most prominent company involved with 3-D printing in the automotive industry. The company is not just producing parts, but building entire 3-D printed cars. Strati, the world’s first 3-D printed car, was built over six days in front of a live audience. This feat caught the attention of many in the auto industry. According to Local Motors, Strati is made of 75 percent 3-D printed materials. Unlike traditional vehicles, which have up to 6,000 parts, Strati used only used 50 for its vehicle, with the body being printed as one solid piece.

Classic car aficionado and comedian Jay Leno has been singing the praises of 3-D printing for years. Parts for antique automobiles are often difficult or impossible to find. Machinists can make new ones, if you pay their fees, but there’s still the chance they won’t get it quite right. According to Leno, 3-D printing does away with the guesswork. “The scanner can measure about 50,000 points per second at a density of 160,000 dots per inch (dpi) to create a highly detailed digital model,” he wrote in an article on the topic. “The 3-D printer makes an exact copy of a part in plastic, which we then send out to create a mold. Some machines can even make a replacement part in cobalt-chrome with the direct laser sintering process. Just feed a plastic wire—for a steel part you use metal wire—into the appropriate laser cutter.”

While the technology is still developing, we may soon see the day when 3-D printers solve many challenges for repairers. Taylor Moss of Estify looks at it this way: “Typically, repairs get held up most by the smallest and seemingly most insignificant parts, and the ability to 3-D print those parts on site would work wonders for using actual OEM specification rivets, screws, clips and retainers.”

Whether it is through the production of small parts, such as brackets and screws, or the ability to print custom parts on-demand, 3-D printing is sure to have an impact on the future of the repair industry.

RIVIAN IS READY As of late September, Transport Canada has authorized Rivian to sell vehicles in Canada. The news came