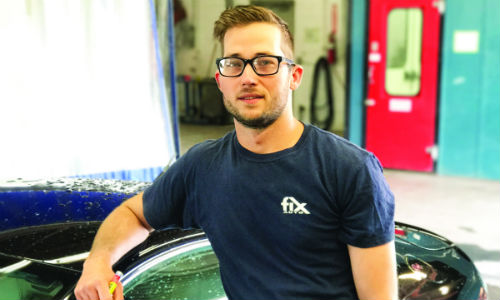 St. Catharines — July 25, 2017 — It’s not often that people have the opportunity to make a fruitful career out of their most loved hobby. Nick Irwin spent a lot of time repairing cars in his backyard while working at a restaurant for income, but eventually grew curious about career alternatives.

“I wanted change,” says Irwin. “My heart was always set on cars, and I realized that I wanted to get outside my comfort zone. Then there was an opportunity, and I just took it.”

The opportunity was with Fix Auto St. Catharines, which absorbed Irwin into the shop’s self-described “young, talented squad of technicians.” Irwin has worked for this third generation family-owned business for about 18 months and is already an asset to the team, with a wide variety of responsibilities, from production management to bodywork.

Irwin has always loved working on cars, so finally making the leap to professional status must have been like a dream come true. His new career has enabled him to leave his comfortable niche at the restaurant and follow his true passions.

“I was too comfortable at my old job, which is so different from the shop,” he says. “I love just being at work. I never think, ‘Ugh, I’ve got to go to work.’ Every day is a new challenge.”

“Nick has a great attitude, an open mind and a willingness to learn and adapt,” says D’Ambrosio.

Irwin has several future goals, speaking to his dedication to personal and professional growth.

“In the future, I would like to take on a management role,” says Irwin. “For now, I’m learning about the business side of things with Johnny’s help, and I’m also learning how to write estimates.”

As with many in the industry, Irwin has found that his experiences as a technician working in a shop has improved his life, and not just in terms of his career.

“I think I’ve become more of an adult,” says Irwin. “I’ve learned to be more responsible. You have to learn to take care of things because if one person isn’t doing their job, it all falls apart. It’s helped me to become a leader.”

Irwin firmly believes that there are always ways to improve, whether it’s as an individual or as a team. The collision repair industry places a lot of importance on creativity and critical thinking, something that may surprise people who have an old-fashioned idea of the business. The chance to find creative solutions to problems is part of what makes every day so exciting for Irwin.

“Once we know better, we do better,” he says. “Every day is an adventure and a challenge. Working at the restaurant was comfortable, but there’s no way I’d ever go back.”

PrevPreviousNotorious: Famous one-of-a-kind 1937 Cord reappears in Canada
NextPrinting Power: Additive manufacturing may be the future of the auto repair industryNext