PUT YOURSELF OUT THERE

WITH A LITTLE BIT OF CONFIDENCE, YOUR CAREER WILL TAKE OFF

About a month ago, our team returned from the 2022 SEMA Show. We had the pleasure of meeting up with several past Bodyworx cover stars: Meghan McEwen, from this year’s winter issue; Chelsie Lesnoski and Cole Marten from last year’s end-of-year publication; Hannah Kasiri of Edmonton’s Lucky 13 custom paint shop, featured in 2020; Cheyenne Ruether, whose endeavours in Las Vegas were featured in 2019. Not to mention the countless potential features we shook hands with on the show floor.

These people all have a few things in common. For one, their careers have bloomed to levels allowing them to take unique opportunities to further their careers. Chelsie and Cole were media partners at this year’s SEMA, riding on the coattails of their success at last year’s Battle of the Builders Young Guns comp. Hannah was signing autographs for lineups of fans at the Indasa booth; Meghan was greeted with a smile from everyone she met. When we saw these individuals, it was clear that they are thriving.

For two, they were all featured on the cover of a magazine for their incredible initiatives in the automotive aftermarket. Meghan has tripled her talents with two auto trades and a motorsports team under her belt; Chelsie and Cole are moving to match their 2021 top-three spot at Battle of the Builders, and gaining ground in Instagram followers every day. Hannah has fans across the world—she even told us some brought her year-old issue to SEMA for an autograph! Cheyenne has been featured on TV shows aplenty—the list goes on.

It can be difficult to recognize your own efforts—and it may be equally as arduous to pat yourself on the back and accept such recognition for what you might see as your daily duties at work. Or perhaps you’re the opposite—a person who simply knows they’re taking off in the industry and believes your ideas can transform a pillar of our sector.

We won’t say that anyone can be on the cover of Bodyworx Professional; there are some predetermined requirements to being featured, either on the cover or between the pages. But, if you have a passion for this industry and ideas to match that vigour, you just might be what we’re looking for. So, if you think you have what it takes to be a Bodyworx cover star, reach out to our editorial team. It could be the best decision you’ve ever made.

COMING HOME TO A NEW PLACE 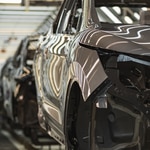