Repairers in the Ranks 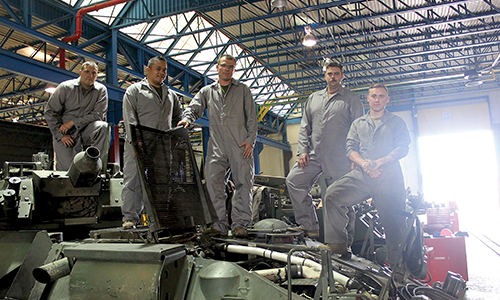 Inside a dimly lit warehouse-sized garage, stocked with light armoured vehicles and convoy trucks, Jesse Leblanc is living out his dream.
Since he was a child, Leblanc had always wanted to be a soldier.

“Growing up, I always played army and just knew the army is where I wanted to be,” Leblanc recalls.

Now 27-years-of-age, Leblanc works full-time as a vehicle technician for the Canadian forces. The warehouse-sized garage, well that’s his office, and the vehicles inside it, his work projects. Dressed in a pair of work overalls, Leblanc is right at home.

It was only seven years prior, however, when Leblanc’s reality was nothing more than a childhood dream.

Rather than enlisting immediately after leaving school, Leblanc went to Centennial College in Scarborough, spending two years taking a course to become a heavy-duty equipment technician. At 20, he took a job in a heavy equipment shop, fixing and maintaining a rental fleet.

While the employment was stable and in his field, it left the young man unsatisfied. Leblanc was determined to make sure his career aspirations didn’t slip away.
“One day I got sick of thinking about it and decided to just do it,” says Leblanc.

After researching the many roles available to members of the Canadian Armed Forces, Leblanc decided to put himself forward as a vehicle technician, realizing that the position would allow him to bridge together both his passion for the military and his expertise as a technician.

Six months after applying, Leblanc reported for basic training in St. Jean, Quebec, where he spent three months. After that, he was off to Shilo, Manitoba, where he completed his qualification as a soldier.
In order to qualify as a vehicle technician, Leblanc spent a year in Borden, Ontario, studying for and eventually receiving his Qualification Level 3, the training specific to his trade. He also gained a more in-depth understanding of what it takes to be a member of the Canadian Armed Forces.

“It was a really cool experience, I really enjoyed it,” says Leblanc. “That’s why I joined up, that’s the kind of stuff I wanted to do. I wanted to be a tech, but I also wanted to be in the military.”
After fifteen months of rigorous training, Leblanc’s dream had become a reality, as he was ready to start his new career.

Now in his seventh year with the forces, Leblanc’s journey has not failed to live up to his childhood expectations. The soldier, who joined as a non-commissioned member was promoted to corporal in 2015, and is now part of 2 Service Battalion, stationed at the military base in Petawawa, Ontario.

“I personally work at a second line shop, which deals with generally bigger jobs,” Leblanc says. “We maintain, repair and overhaul land vehicles. Anything we use to drive around, we take care of it.”
Since completing the formal training for his position, Leblanc has continued to learn more-and-more about his profession over the course of his time in Petawawa, specifically in the field of diagnostics.
“Everything is different, you get stuff that comes in that you may have never seen before and you have to be able to diagnose the issues,” says Leblanc.

Leblanc is also considering pursuing further education within the forces. He is eager to complete his Primary Leadership Qualification, which would pave the way for him to take on larger responsibilities.
“I’d be in charge of a section of techs on the floor,” says Leblanc. “It’s definitely more of a leadership role, one that forces you to be responsible for those underneath you.”

Outside of his work, Leblanc has taken the opportunity to get involved in the military community, becoming a part of the base’s rugby team. In October 2015 Leblanc travelled overseas with the team, as a chance to compete internationally.

“I’ve had a lot of great non-military related opportunities come my way by being in the military,” Leblanc says. “The military isn’t just a career; it’s a lifestyle, one that will offer you opportunities you won’t find anywhere else.”