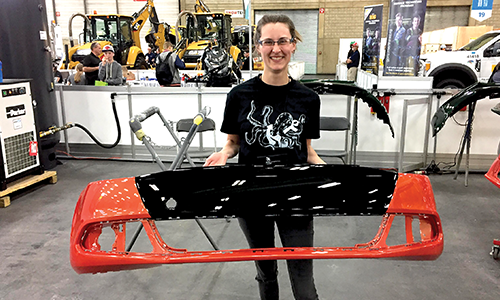 Despite her national recognition, it wasn’t long ago when Hamilton first discovered her passion for car painting.

Enrolled in an options program back in high school, she was tasked with the decision of selecting a job to shadow.

“Initially I wanted to do video game art and design, but there wasn’t many places in Nova Scotia to do that,” Hamilton said.

After being advised by her program instructor to pursue a career that would make use of her strong mathematics skills, she decided to try her hand at a trade. All it took was one trip to an autobody shop before the Nova Scotia resident was hooked; signing up for an autobody collision repair and refinish program shortly after.

At 20-years-of-age, and enrolled at a post secondary institution, Hamilton began competing in car painting competitions. It wasn’t long before local bodyshops began to notice her work.

“My cousin’s husband reached out to me asking if I was looking for a job and if I was interested in working for them,” she said. “I had caught his boss’s attention after a local paper wrote an article on the skills competition.”

“I was a bit nervous but I knew what I had to do,” said Hamilton. “I was not prepared for all the cameras and videos being taken over the two days but I didn’t find it bad after I was done.”

Hamilton placed fifth out of eight competitors, missing the podium by only a few points. Her experience was motivation to get back again. She had a hunger to win, and most of all a desire to continually improve her abilities as a painter. It was a major turning point in the young trade worker’s career.

“Asking the judges questions on how I could improve or what I could do better, really helped me a lot heading back to the shop in Nova Scotia,” said Hamilton. “I really grew as a paint tech.”

The extent of Hamilton’s growth was undeniable. She qualified for the next two national competitions, continuing to ask questions and observe the great talents that surrounded her. Despite finishing outside the podium in her first three national competitions, Hamilton remained focused and determined to improve on her previous performances.

At 24 years-of-age, this year’s nationals in Edmonton would be Hamilton’s last crack at a gold medal. Having contended for the past five years, Hamilton had more than proven her elite technical ability. Being the lone returnee from last year’s event, Hamilton not only competed but also mentored those around her. Hoping her hard work had paid off, she waited patiently as the winners were announced.

“Hearing my name called out for gold will always be a memorable moment for me,” said Hamilton. “Knowing the judges so well and meeting so many friends in the industry will open up many doors for me going forward.”

It is connections such as these that have benefited so many past competitors.

“We’ve had instances of companies at the event offering employment to participants right on the spot,” said Shaun Thorson, Chief Executive Officer of Skills Canada. “A lot of people can do quality work and a lot of people can work quickly, what separates our medal winners from these people is that they can do both.”

These are qualities that Hamilton can now hang her hat on going forward in her career. Having now graduated her school program, as well as received her Red Seal certification, it is unclear what exactly is next for the tradeswoman.

One thing that is for certain, Hamilton will remain active in the very competition that has done so much for her career.

“From here I’ll stay involved in Skills through the alumni,” said Hamilton. “I really hope to become a judge, mostly so I can see other apprentices like myself grow and compete.”