SEMA in Review: Battle of the Builders 2017 feature 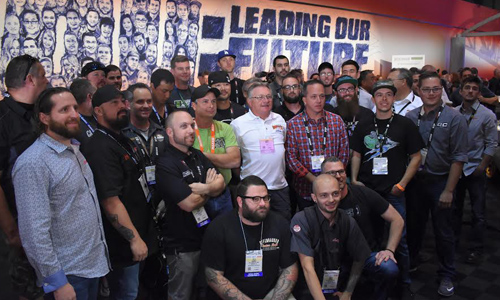 Las Vegas, Nevada –November 14, 2017— A panel of judges named Troy Trepanier champion at the SEMA Battle of the Builders Competition, November 7. His winning build was a 1929 Ford Model A Tudor Sedan hot rod, “chopped and dropped” in the traditional style, and painted in clean golds and bronzes that accentuate the cars natural body lines—a staple feature of its generation.

The competition was tough this year, and according to judges, it was hard to pick a winner. Landing second place was another Ford Tudor from 1932, built by Alan Johnson. The third place winner was a 1936 Packard Roadster by Troy Ladd.

This year saw returning judges RJ DeVera of Meguiars, David Freiburger from The Enthusiast Network, and Fred Williams from Petersen’s 4-Wheel & Off-Road. The show marked an excellent departure from the norm for Freiburger in particular, who has built such cars as the “Rotsun” (a very rusty rat-rod style Datsun) and the “General Mayhem” (a Dodge Charger with panels from at least three different vehicles) on The Enthusiast Network’s Roadkill program. Joining Freiburger, Williams, and DeVera were two brand new judges, both young people engrossed in and popular in the online automotive communities. Michael Ngyuen, who runs the web-based channel ‘SmurfinWRX’, and David Patterson, who produces ‘ThatDudeinBlue’ served as judges specific to the Young Guns category, which had its own distinct 10 winners this year for the first time.

The Young Guns Battle of the Builders Recognition program was started just last year, and new to this year’s show was an individual top-ten selection and countdown for the category. The builders competing Young Guns were all under the age of 35, and according to Kersting, the program aims to get young people interested in the industry. “The Young Guns program allows us to shine the spotlight on some of the up-and-coming builders who have demonstrated that they can compete with industry veterans and icons,” said Chris Kersting, SEMA’s President and CEO. “These young builders, just like all the builders from the SEMA Show, have already proven themselves simply by having a vehicle at the SEMA Show.”

He added, “There is no question that they are amazing builders. The SEMA Battle of the Builders competition allows us to celebrate their talents and share it with the rest of the world.”Kersting is an outspoken advocate for young people in the industry and in the automotive community at large, who stresses often how important it is to get young people involved with the industry.

Kersting congratulated every builder personally, making it clear that no matter who the winners were, everyone participating at the show with a car was greatly respected and appreciated. Velocity hosts presented the top 12 Builders, with Phil & Jeremy Gerber, Larry Griffey, Andy Leach, Mike Markin, Jeremy Miranda, Peter Nam, Cris Payne, Eddie Pettus and Scott Roth having the honour of making the top 12 alongside the top three winners.

Distinct this year was Cris Payne’s 1995 Chevy Bronco, one of the first heavy-duty trucks to have made it this far in the Battle of the Builders competition. The Bronco is set up for serious off-roading, with completely custom fabricated body panels, a modern “raptor” style front grill and completely modified or replaced suspension. Though it didn’t win, it’s impressive to see a truck holding its own among the hot-rod and muscle car champions.

The top three are a change from last year’s Battle of the Builders, the winner of which was a 1969 Camaro built by Cam Miller. The first-ever Battle of the Builders winner was also a custom Camaro of the same year. David Freiburger, speaking to the common-nature of the ’69 Camaro said, “It’s the pro-touring car,” adding, “Any ’69 Camaro has to be really impressive to even get noticed.”

If you couldn’t make it out to SEMA this year, fear not, as Discovery’s Velocity channel, their joint venture with The Enthursiasts Network, will be airing a full-length feature on the 2017 Battle of the Builders Tuesday, January 2. “As a trade-only event that is not open to the general public, the SEMA Show is where every car fanatic dreams of going,” says Chris Kersting, SEMA President and CEO. “SEMA Ignited – the official SEMA Show after-party – has made it possible for consumers to participate in the excitement. The Battle of the Builders TV Special also gives viewers who have never experienced the SEMA Show an opportunity to see what actually happens, while those who attended the Show get to relive the experience.”