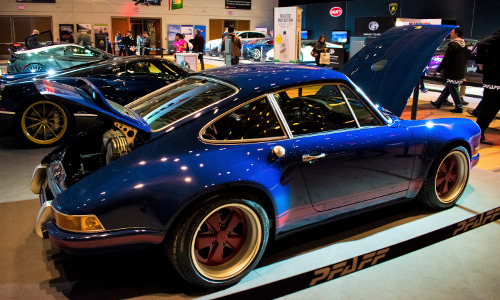 There is always plenty to catch your eye at the Canadian International AutoShow. From new concepts, to revitalized classics, there’s something for everyone. One of the most exciting and enticing exhibits this year, however, came in the form of Auto Exotica, which featured tens of millions of dollars worth of classic and exotic supercars from around the world.

Lotus Canada, Pfaff Automotive, Ferrari Canada and Grand Touring Automobiles were all present to show off their best and most desirable cars, making the room a veritable Disneyland for the automotive enthusiast. From an impressive array of McLarens presented by Pfaff, to a ridiculously rare Ferrari 365 GT/B Daytona, eye catching models were all over the floor. One of the most interesting cars to grace the floor, if not necessarily the fastest or most desirable, was a Singer-Built Porsche 911.

Described by Michael Harvey of Autoblog as “the most alluring vehicle in the world,” and “the world’s finest Porsche 911,” by Top Gear, the Singer-Built Porsche 911 is certainly a sight to behold. Painstakingly restored, and them perfectly reimagined, Singer’s Porsches are candy for the eyes. Every line on the vehicle seemed to be perfect, and every detail seemed meticulously handcrafted to create the most perfect Porsche I’d ever seen in my life. This Porsche, a relatively simple German, flat-6 equipped tourer, sat proudly and respectably amongst v12 equipped Ferraris, ridiculously rare Paganis, and the likes of the Bugatti Chiron.

What’s more interesting is that Singer Vehicle Design, whose vehicles look completely at home amongst the most expensive cars the world has to offer, was started as a body shop specializing in Porsches. The idea behind Singer has always been perfection, but they certainly weren’t working with the same level of prestige off the hop that Ferrari or Bugatti or Lamborghini had established, proving that it’s more than possible to create for yourself a cohesive and individual brand aesthetic.

The fact that Singer started off much like any other body or custom shop is not just impressive, it’s important. In 2008, Rob Dickinson, a British native living in California, with experience as a body shop tech, started convincing people to let him work on their Porsches. With a catalogue of prior work behind him, and a clever, if unorthodox, marketing model, Dickinson has managed to create a brand that is synonymous to the rich and famous with quality and automotive excellence. Each one of the custom cars takes around eight months to build, which includes a complete body restoration, fabrication of specialized widebody panels, painting in custom colours and livery’s reminiscent of the early Grand Tourers/Rally cars of the ’60s and ’70s, and a complete mechanical overhaul. Roof panels, hoods, and fenders are all specially fabricated out of Carbon Fibre by the Aria Group, shaving even more weight off of the car, giving it a look such that it can in no way be mistaken for a regular old Porsche 911.