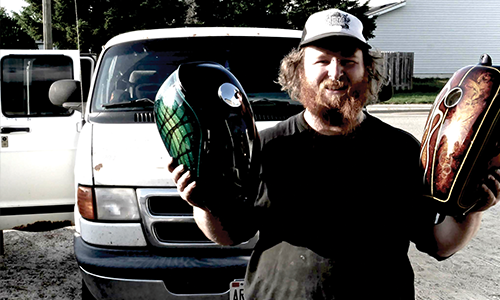 Jamie Haffenden balances his life as a musician and operator of his own custom paint bike shop — Jamie Haffenden is a man of many hats—and two names. Hailing from Orillia, Ontario, he has made a name for himself in both the auto industry and the Canadian music scene. This lucky combination of talents has shaped his life as a top-notch painter with his own shop and a musician with two bands. Whether he is known as Jamie Haffenden of Savage Customs Paint Shop or Terry Savage of Terry Savage and the Wonky Honkees, he continuously puts out great work. Balancing these two lives cannot be easy, but Jamie not only finds a way—he does it well.

At 18, he was given the opportunity to work at his father’s shop, Reliable Auto Body; developing his interest in the industry. Initially working on rust repair for all kinds of vehicles, his specialization soon became custom painting. As a motorcycle enthusiast, it comes as no surprise that bikes became his primary vehicle to work on. Two years ago, Jamie opened Savage Customs, a business focused on doing custom paint jobs on motorcycles.

Jamie’s journey into his music career began much earlier. While he does not have a family of musicians, it has always been large part of his life. His father got him his first drum set at age 12, which kicked off his interest in music. After a year of playing the drums, he picked up his sister’s guitar and started playing. Sucked in, it was not long before he was singing and writing his own music. Surrounded by all kinds of music styles, Jamie learned to play and write in many different genres. From this sprouting talent came the bands Like Animals and Terry Savage and the Wonky Honkees.

Like Animals formed eight years ago as a progressive hard-rock trio with Jamie on guitar and lead vocals. Looking to make music without limits, Jamie showed off his genre-spanning skills over several albums. The 2009 release Sweet Whispers, Plagued Ears debuted their music to the world and has been followed by four more albums. In 2016, Like Animals released their latest EP, Feral. Full of energy and hard-rocking guitar riffs, Jamie does not hold back. In five songs, he demonstrates his skills has a guitarist, vocalist and songwriter. As if releasing several albums while building an autobody career was not impressive enough, he took a massive departure in music style with the Wonky Honkees.

Performing under the name Terry Savage, Jamie formed the five-piece group, Terry Savage and the Wonky Honkees. Describing themselves as “Ontario’s Truckstop Troubadours,” they bring country music back to its roots. Keeping the raw country sound but adding an energetic kick, they win over fans of punk, metal, and folk at their wild shows. Releasing a few singles here and there, Jamie hopes to have an EP out this winter once he can find the time in his busy schedule. For now, the band is embarking on short tours around Canada playing shows all over the country. Getting the stage name from an old helmet he found with Terry written on the side and his Suzuki Savage Motorcycle, Jamie wears his inspiration from the auto industry on his sleeve—or rather his head.

Even with the success he has had, Haffenden admits it is not easy balancing the shop with his music career. Being part of two bands is demanding in itself, even without the added commitment of running a business. Fortunately, since becoming the owner, Haffenden has been able to make the time for new music and playing shows. While he confesses his music has taken a back seat to the auto business, his ambition has not. Between his two bands, he has gone on short tours for the last six years. Even when he is back in Orillia, the music never stops calling. “I always have a guitar at the shop,” he said. “Some of the best music can come out of letting your mind explore while you’re working.”

He has also noted that his two worlds are not always kept separate. There have been times when the two parts of his life have interacted. Particularly this year, he said, “A lot of people I’ve painted bikes for this season have seen me playing at bike shows.” It has also been helpful with out-of-town business. Gaining clients from all over Canada, Haffenden was able to deliver a tank to Saskatchewan while on tour. As difficult as it is to juggle a music career and a body shop, he shows that they do not have to work against each other.

Haffenden recently embarked on a tour with Terry Savage and the Wonky Honkees. Although the tours usually only last for a few weeks, he enjoys being able to get away. “Tours are a fun vacation. We go camp, we party, and play for fun people,” he said. With all the great work he has put out over the years through his bands and Savage Customs, Haffenden will certainly continuing going places in both industries.