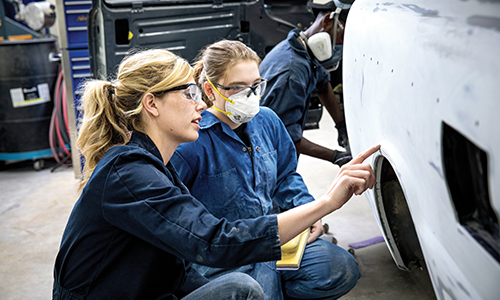 As an apprentice, you deserve support — Knowing that you have people to lean on is extremely important in this industry. In fact, feeling isolated is a major reason why many individuals leave their place of work. Consequently, mentorship can have a big impact on the culture of the repair industry. If people feel like they fit in and are supported, they will be satisfied at their place of employment, engage in repair procedures, and become better and more reliable employees.

In high school, my initial experience in collision repair was difficult and I often felt secluded and alone. My first boss encouraged me to join reception and to stay away from working in the back of the shop, as it was a “challenging environment.” I told him that I wanted to learn autobody and that I would do whatever it took to be a part of the shop. He reluctantly gave me a cleaning position in the shop, where I was responsible for sweeping the floors and taking out us ed parts and garbage. I knew I had to start somewhere and believed that if I proved I could handle heavy parts and keep the shop clean, eventually I would get promoted to the wash bay or prep station.

It always seemed that the techs were trying to keep me busy with cleaning. I felt like no one wanted to help me progress in learning about the industry. Garbage was thrown on the ground, even though there were garbage cans every ten feet. While I was cleaning, I would see my colleagues throwing sandpaper in the opposite direction of the trash can, laughing. When I asked technicians to show me what they were working on, they would tell me that they were too busy and instruct me to sweep their stall and take out used parts instead.

I did not have any friends in the autobody industry. My friends from my high school were confused as to why I would want to work in a noisy, dusty and demanding environment. None of them had the same passion for vehicles that I did. They would often say, “what do you expect, you shouldn’t be in a shop,” or “it’s not a place for you,” when I told them about my struggles. They said it was impractical for me to believe that technicians would take me seriously. They thought of shops as a place where the guys could go to hangout.

I felt like no one understood my discouraging apprenticeship endeavour. I started to feel dejected, after many months of sweeping and taking out the trash. It was unfair that the technicians and manager didn’t take me seriously as a hopeful apprentice. I began to believe that I would never get the opportunity to elevate my abilities and become an autobody technician if I continued in the role I was in.

It wasn’t until I attended a 12-week pre-apprenticeship program that I began to gain practical knowledge. This was extremely important as it allowed me to advance my education before attempting to return to a shop. I finally made some friends who shared my interest in autobody, and the students and teachers were supportive during the learning process at school. While enrolled in the course, we were required to complete work experience in a bodyshop as part of our assessment. I met with shop managers and told them that a four week practicum was part of the training program, and it was required that I work on tasks that an autobody technician apprentice would complete. I was met with raised eyebrows and questions about my competence and comfort with hard work.

I went to at least a dozen shops before I found one that agreed to take me on. My job was to sand and mask vehicles for refinishing. I met with the painter and the manager told him that he would be responsible for watching over my training and to ensure I did the work correctly. I tried to do everything he told me, but after a couple weeks, he stopped directing me. I would see him remove my masking in the booth and redo almost every job I sent to him. I was confused as to why and when I asked him, he told me not to worry about it.

I began to receive different types of jobs such as painting the shop walls, organizing body panels and restocking prep area supplies. After the 4-week practicum, the manager told me that they would keep me on and pay me minimum wage. I decided to stay and try harder to complete quality repairs. I made sure my masking was tight with no pockets and tried to ensure that my blocking was done correctly. My assigned jobs took longer, but they were better, and I did not see as much revising done.

After a month, another more experienced and efficient prepper was hired on. Soon after, my manager told me there was a shortage of work at the shop and that they would not be able to keep me as an apprentice. Even though I was let down again, I didn’t give up. I knew I could succeed in the trade with more practice.

I drove around the city with my new resumes, looking for employment. I felt confident now that I had more experience and knowledge of the industry. I eventually found employment at a small family-run shop. I would be the only apprentice, so I would be required to complete all aspects of the repair processes, from disassembly to minor body work and painting to reassembly of the repaired vehicles. With help, my skills and knowledge flourished, and so did the shop. I was able to develop relationships with the new employees and they showed me respect. We were all able to work together as a team.

No one can be expected to be proficient when they start out. Passing on knowledge and experience should be a goal of anyone competent in a profession. Some people can be driven away when they feel unsupported. Solving problems, correcting mistakes and steering apprentices toward the correct methods of repair is very important for the trade to survive. Having an inclusive, diverse workforce in the shops will keep the desire to work in autobody alive. After all, apprentices are required to complete most of their training on the job. Without some form of mentorship, the apprenticeship experience can be diminished.