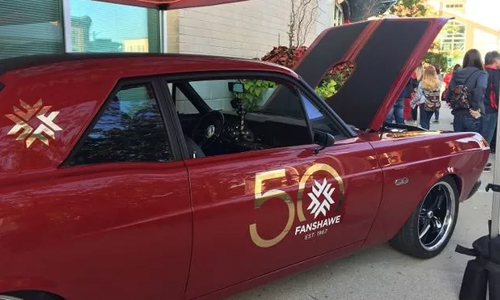 Belleville, Ontario — September 18, 2017 — Fanshawe College recently celebrated its 50th anniversary with a slew of exciting events. The students of Fanshawe’s transportation technology program took celebrating the anniversary to new heights this year, by restoring a 1967 Ford Falcon in honour of the 50 year mark.

At least 30 students worked on the car throughout the school year, and spent a total of around 2,000 hours on this project.

“It was a huge undertaking,” said Mike Kennelly, Coordinator of the Autobody Apprentice Programs. “They had to stay later and work harder, because the deadline was so aggressive.”

Students had about 11 months to work on this project to get it ready in time for the anniversary celebration. The deadline provided some good insight on what it would be like to meet strict timelines once they’re working in the industry.That wasn’t the only thing students got out of the long days and hard work.

“What they get out of their training multiplies, because they get that much more out of it,” said Kennelly.

The Falcon, which was introduced to the streets the same year Fanshawe College opened, was built locally at the former St. Thomas Ford assembly plant. Fanshawe got hold of the vintage vehicle last October from its owner in Arizona. According to Don Bester, Transportation Technology Instructor at Fanshawe, the Falcon had a dingy white paint job and needed quite a bit of work to be restored to its former glory.

The vehicle boasts custom seats embroidered with the Fanshawe College falcon mascot, a new engine, a glossy red paint job, a powerful sound system and fuzzy dice on the rear-view. It also has performance brakes, an automatic transmission, power steering and electronic gauges.

The Falcon is ready to hit the streets. Bester says they plan to bring it to shows and recruitment events to promote Fanshawe College and its transportation technology program.

Over 6,000 current staff, students, retirees and alumni attended Fanshawe College’s recent anniversary celebration in the Budweiser Gardens. The event included live shows from Barenaked Ladies and Hedley, and, of course, the debut of the refurbished 1967 Ford Falcon.