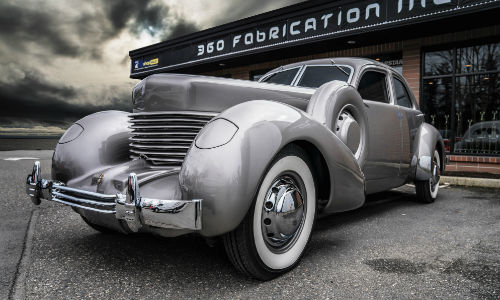 Abbotsford, British Columbia — July 20, 2017 — Some vehicles gain notoriety for engine innovation or revolutionary design. Others become famous because of their owners. In those cases the cars can become almost as legendary as the owners themselves. This is the situation with a one-of-a-kind car that played a part in the political history of the American Deep South, seemed to vanish into thin air, and then reappeared 80 years later in Canada.

In the roaring ‘20s in Auburn, Indiana, a man named Errett Lobban Cord was drawing notoriety as part-promoter, part-visionary. He was a flamboyant salesman and business tycoon who was drawn to the car-making business because of its moneymaking possibilities.

In 1924, when he was just 30 years of age, Cord took over the day-to-day operations of the Auburn Auto brand. Rather than focus on the conservative designs of the day, Cord focused on cosmetics. Almost overnight, Auburns were transformed into some of the best-looking cars on the road. They were technical and styling masterpieces.

By 1929 Cord was looking to expand the company to include his own name on the roster. Thus the brand regarded by many auto experts as the coolest and most revolutionary nobody’s ever heard of, the Cord Automobile Corporation, was born.

At the same time as Cord’s star was rising in the automotive world, 800 miles to the south in Louisiana one of the most outspoken and colourful politicians in US history was also climbing through the ranks. Huey Long, nicknamed “The Kingfish,” was elected as a US Senator in 1932 after serving five years as Governor of Louisiana. A vocal Democrat and supporter of Franklin D. Roosevelt, Long’s agenda was received with well-publicized outrage by the Ku Klux Klan, who publicly denounced him as having “un-American views on authority.”

By early 1935, the two men’s lives were about to intersect. Under the shadow of growing threats by his enemies towards Long, the State of Louisiana commissioned a custom-made vehicle. It was a one-of-a-kind Cord, featuring an astounding 18 automotive firsts.

This particular Cord had been commissioned to be bulletproof. Construction began on the hand-built vehicle, but fate intervened. On September 8, 1935, a single assailant shot Senator Long in the stomach. He died two days later.

Meanwhile, construction on his vehicle continued, and, upon its completion two years later in April 1937, the Cord Automotive Company delivered the vehicle to the State of Louisiana. With no clear mandate for its use, the Cord was turned over to the US Coast Guard. The vehicle was used to transport dignitaries until it was sold in 1944 to a senior officer. The officer was killed in World War II, having barely had a chance to drive the luxurious automobile.

The officer’s widow placed the Cord in storage, where it remained until 1963 when she opted to trade the car in on a brand-new Oldsmobile. The owner of the New Brunswick dealership recognized the significance of the Cord, and kept the vehicle in private storage, never driven, until 1984 when he decided to downsize his collection. Enter Canadian businessman Gary Morgan, of the small farming community of Chilliwack, British Columbia. Morgan had heard of the collection and in particular the rumours of the historic, and possibly cursed, 1937 Huey Long Cord.

With little patience for superstition, Morgan purchased the Cord as a restoration project, and returned to Chilliwack where the Cord spent 30-plus years being slowly restored to its original grandeur.

“I bought the car as a project in ’84 and I’ve been working on it ever since,” says Morgan.

Aside from its illustrious pedigree, the 1937 Cord is one of the most important automotive accomplishments in history. The car boasts a total of 18 automotive firsts, including hidden antennae, a unibody design, hidden headlights, a concealed gas cap, electric shift, no running boards, front-opening hood (which led to the nickname “coffin nosed Cord”), first North American production front wheel drive, first detachable powertrain and the first vehicle with no visible hinges on the outside but instead built into the doors of the car. All of these significant milestones make the Cord a “rocket ship of the 1930s” with a number of groundbreaking design and technological elements that weren’t achieved by its competitors until the 1960s.

Morgan suffered a series of strokes, and in late 2016 he had the car shipped to 360 Fabrication in Abbotsford, British Columbia. The job of recreating the Cord fell to expert fabricator and one-half of the 360 ownership team, Daryl Francoeur.

“We looked everywhere to find pictures of this car to use as templates in the restoration but there simply aren’t any. It’s been in storage essentially since 1941, and although there are other 1937 Cords, this one is 100 percent unique. It truly is a one-of-a-kind car and the restoration has involved hand rebuilding the car. It’s like putting together a jigsaw puzzle without a picture reference,” says Francoeur.

The Huey Long Cord made its very first public appearance in its 80th birthday year on March 28, 2017 at the Vancouver International Auto Show as one of the featured specialty vehicles.

Morgan is upbeat about the finished vehicle. “The car is an important and significant part of history, and it’s fantastic it’s finally done. The team at 360 has performed wonderfully and the workmanship is remarkable.”