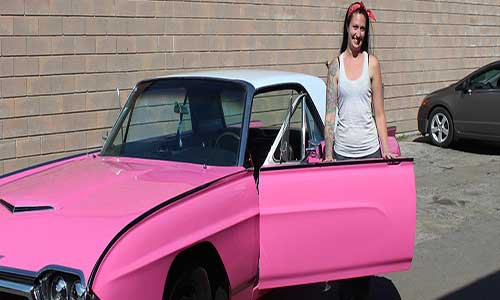 Hilary Noack of Ink & Iron has moved from the classroom to the floor, but she’s still teaching.

However, those of us close to the business know that there have been women working all throughout the collision repair industry for many years. Women have an obvious presence among office staff, but there are quite a few women who are body techs, painters and managers or owners of large, high-volume collision repair facilities. It’s important for young women considering a career in the automotive world to see other women who are already in the field, but simply stating that Hilary Noack is a tech, a shop owner and a woman doesn’t do justice to her or what she’s achieved.

Ink & Iron isn’t just a facility owned by a woman, or a facility that employs women, it’s nothing less than a training ground for the next generation of great professionals. The vast majority of the techs and painters working at Ink & Iron are young women. They’re enthusiastic and passionate about their work and their future.

“I was looking for something to set us apart,” says Noack. “As well, by meeting other women along the journey, hearing their stories and their struggles, I started to think that we could help them. There simply weren’t very many opportunities for them to learn their trades in an environment where they don’t feel there are about 500 guys creeping on them.”

Noack got her start in the business as a co-op student in high school, working at Mark’s Custom Collision in Prince Edward County. Her interest was piqued by a need to fix up a personal vehicle. “I was driving my parents’ cars, and I kept getting grounded, and that’s the first thing they’d take away,” says Noack. “I didn’t know anything about cars then, but I figured they wouldn’t be able to do that if I got my own. I bought a 1970 Oldsmobile from an ad in the paper and fixed it up.” Bear in mind that this was in 2003, so that 1970 Oldsmobile was over 30 years old by that point and showing its age. Noack put a lot of work into it to get it ready for the road. It’s true that hard work pays off. For Noack, it paid off with a car that was her very own, and it put her on the path to her current career. “At first I thought I might want to be a mechanic, but it turned out that I liked the aesthetic end more,” she says. Aside from Noack, the staff at Ink & Iron are mostly part-timers who have other jobs in the industry. However, working part-time at Ink & Iron has its advantages. The facility does some collision work, but the main focus is on custom and restoration. It’s a chance to work on jobs the average tech or painter doesn’t get to touch. It’s also a chance to build a bigger skill set.

“A lot of the learning process for anything is trial and error,” says Noack. “But when you’re working in a high-pressure fast paced collision repair facility, there isn’t time for your boss to let you make mistakes or try something new. A lot of the girls who work here have other jobs in the industry, but they’re doing really specific jobs. Here, they get to try new things and build new skills.” That opportunity for cross-training might be part of the reason that other facility owners don’t mind their staff putting in a few hours at Ink & Iron. Lorenzo D’Alessandro is the owner of CSN-427 Auto Collision, one of Toronto’s biggest and busiest collision repair centres. More than a few of the women working at Ink & Iron also hold down fulltime positions at his facility. “We’re very production focused and making sure we’re getting work done better, faster and cheaper,” says D’Alessandro. “There’s opportunity for some cross-training here, but frankly there’s no time for making mistakes, and that’s part of learning your trade. Hillary’s not just fixing cars. She’s providing opportunities, and I think the benefits are going to show up all around the industry.”

Anthony Iaboni would likely agree. Iaboni is the owner of Collision 360, an industry distributor based in Toronto. He liked the idea of Ink & Iron so much that he started reaching out to his vendors to help get the shop up and running. “I approached Pro Spray, and they donated paint mixing machinery, toners, with both of us absorbing the cost,” says Iaboni. “PBE Distributors helped quite a bit with that and with training, and SATA donated a few spray guns. Norton kicked in with some cabinets. Opening a new facility is a big investment. I see the numbers every day, and I know it’s not easy.” Iaboni viewed this as simply helping to pay back the industry. “A lot of it was karma,” he says. “My business is relatively new and a lot of collision shops helped me get up and running. Some people loaned me staff, others simply paid me promptly. Every little bit helps. When I saw a young person, which the industry desperately needs, trying to open a new shop, it was a no-brainer. We need people who can teach and encourage others.”

There’s more to being a teacher than just knowing the subject. There are plenty of great body techs who can’t teach what they know, but Hillary Noack isn’t one of them. She taught at Centennial College for a number of years. Recently, she became the first woman to teach autobody full-time at the college, but she left when she decided to start her own business. “This is what I’ve always wanted to do,” she says. “I like teaching, but I’m really more hands on.” At Ink & Iron, Noack gets to do both. And she just might be helping to train and mentor the next generation of collision superstars.